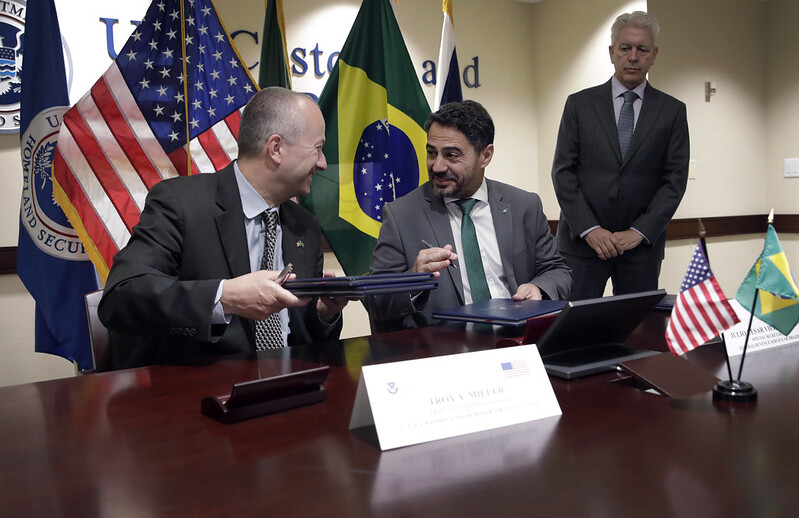 New agreement will boost cooperation, trade and customs security in both countries

“The strong, innovative private sectors of the United States and Brazil place enormous value on accessing each others’ powerhouse markets.  We set a new bilateral trade record last year and are on course to break that record again this year.  A unique component of our trade is the high level of value-added goods and services that make up the majority of Brazilian exports, creating thousands of new jobs for Brazilians, as well as new jobs in the United States.  This new agreement will help accelerate that upward trade trajectory, while at the same time creating new opportunities to improve joint security”, said the Chargé d’Affaires of the U.S. Embassy and Consulates in Brazil, Douglas Koneff.

“With a broad mission that includes border security, as well as facilitating lawful trade and travel, CBP is acutely aware of the importance of engaging our international stakeholders as we did today with our close partners in Brazil,” said Troy Miller, CBP’s Deputy Commissioner.

The Government of Brazil, CBP’s Office of International Affairs (INA) and the Office of Field Operations first signed a Customs Mutual Assistance Agreement in 2002 as an initial step to enhance cooperation, trade and security in areas of shared responsibility. In 2005, CBP and Brazil launched the CBP Container Security Initiative, which identifies high-risk containers, prescreens and evaluates containers before they are shipped, and uses technology to prescreen high-risk containers rapidly to not slow down the movement of trade. In 2014, CBP began working with Brazil on an AEO supply chain security program, and in 2015 signed a joint work plan to strengthen the secure trade partnership. The signing of this MRA is the next step in ensuring compatibility between each nation’s trade and security programs while advancing to the next phase of joint work.

MRAs are bilateral understandings between two Customs administrations that provide a platform for the exchange of membership information and recognize the compatibility of the respective supply chain security program.

The document, referred to as an “arrangement,” indicates that the security requirements or standards of the foreign industry partnership program, as well as its verification procedures, are the same or like those of the Customs Trade Partnership Against Terrorism (CTPAT) program.

The essential concept of MR is that CTPAT and the foreign Customs Administration program have established a standard set of security requirements which allows one business partnership program to recognize the validation findings of the other program which benefits both Customs Administrations and the private sector participants.

CTPAT is committed to continue to work with all international stakeholders to strengthen and secure global supply chains and the further global standardization of AEO programs.