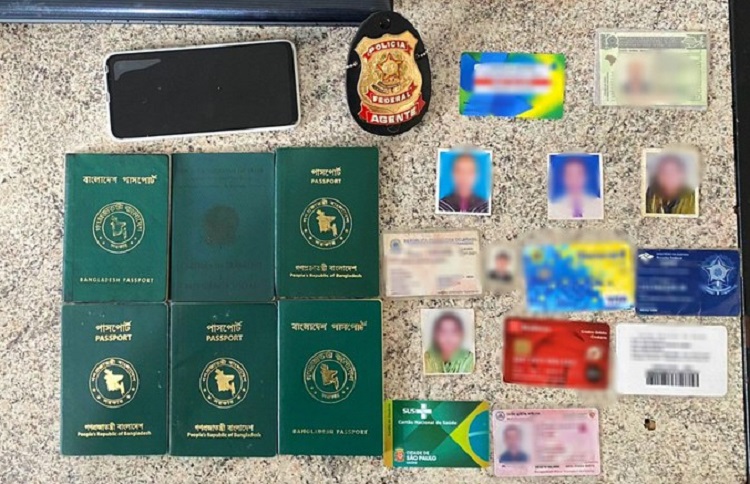 Brasília, December 3, 2021: An investigation by Brazilian Federal Police, supported by U.S. Immigration and Custom Enforcement (ICE) Homeland Security Investigations (HSI) and the Human Rights and Special Prosecutions Section of the U.S. Department of Justice’s Criminal Division led to thirteen arrests and the disruption of a major human smuggling ring based in Brazil.

On Dec. 2, as part of Operation Blood Ties and with support from U.S. law enforcement, Brazilian authorities executed 21 search warrants and 13 arrests in the Brazilian states of Sao Paulo and Minas Gerais. The arrests included numerous Brazil-based Bengali nationals on Brazilian federal charges of human smuggling and operating a criminal enterprise. The human smuggling organization is alleged to be responsible for the illicit smuggling of scores of individuals from Bangladesh and other countries in South Asia into Brazil, and ultimately to the United States.

“We are grateful to the Brazilian Federal Police for their continued partnership in combating transnational criminal organizations,” said Brazil Acting HSI Attaché Patrick Chen. “This successful operation shows the importance of international collaboration when it comes to disrupting human smuggling networks who undermine our immigration system and put countless lives at risk while doing so.”

“Transnational criminal organizations involved with human smuggling are a continuing threat to border security, public safety and national security, but today through our strong domestic and international partnerships, we were able to significantly impact their network,” said Scott Brown, special agent in charge for HSI Phoenix. “HSI is fully committed to working with partner nations to identify and dismantle illicit activities and criminal organizations worldwide who pose a threat to our nation.”

HSI is a directorate of ICE and the principal investigative arm of the U.S. Department of Homeland Security (DHS), responsible for investigating transnational crime and threats, specifically those criminal organizations that exploit the global infrastructure through which international trade, travel, and finance move.

HSI’s workforce of over 10,400 employees consists of more than 7,100 special agents assigned to 220 cities throughout the United States, and 86 overseas locations in 54 countries. HSI’s international presence represents DHS’s largest investigative law enforcement presence abroad and one of the largest international footprints in U.S. law enforcement.

U.S. Immigration and Customs Enforcement (ICE) was established in March 2003 as the largest investigative arm of the Department of Homeland Security. ICE is comprised of four integrated divisions that form a 21st century law enforcement agency with broad responsibilities for a number of key homeland security priorities.