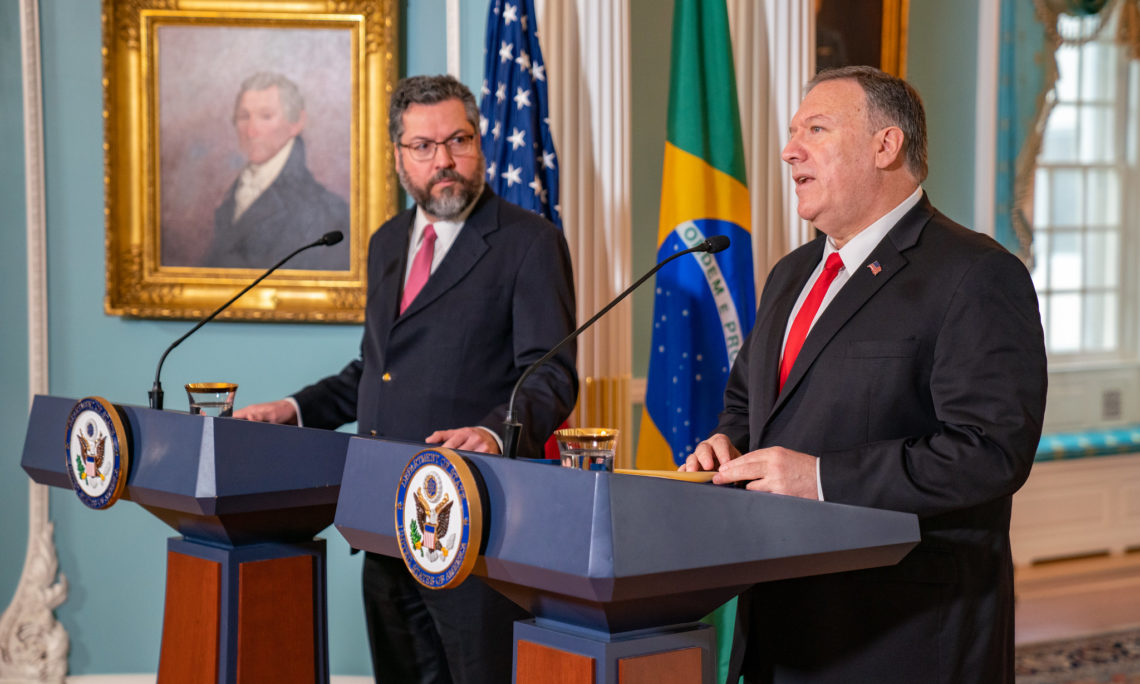 OFFICE OF THE SPOKESPERSON

On September 13, Secretary Michael R. Pompeo launched the U.S.-Brazil Strategic Partnership Dialogue with Brazilian Foreign Minister Ernesto Araujo.  The U.S.-Brazil Strategic Partnership Dialogue is a direct outcome of the March 19 meeting between President Trump and President Bolsonaro in Washington, D.C. and serves as a platform for advancing joint action on U.S.-Brazil shared priorities.  The Dialogue focused on and advanced bilateral collaboration in a range of areas, organized under three pillars: Supporting Democratic Governance; Pursuing Economic Prosperity; and Strengthening Security and Defense Cooperation.

During the Dialogue, Secretary Pompeo and Foreign Minister Araujo highlighted the establishment of a private sector-led $100 million, 11-year impact investment fund for Amazon biodiversity conservation, following through on the commitment Presidents Trump and Bolsonaro made in March.  They emphasized the significant and growing economic relationship between the United States and Brazil, highlighting steps to facilitate trade and investment, deepen collaboration on the digital economy, and lower trade barriers on goods such as ethanol.  The delegation affirmed continued U.S. support for Brazil’s accession to the Organization for Economic Cooperation and Development (OECD), in line with President Trump’s March 2019 statements.  Under Secretary Krach also announced the relaunch of the U.S.-Brazil Joint Commission on Science and Technology Cooperation, expected to take place in Brasilia in November, and U.S. support for an Energy Seminar in Rio de Janeiro to promote bilateral investment and export opportunities in October.  They welcomed plans to hold the next phase of the U.S.-Brazil CEO Forum in Washington in November.

Secretary Pompeo commended the Foreign Minister for Brazil’s decisive leadership in addressing the ongoing crisis in Venezuela.  The leaders reinforced our partnership to promote global peace and security, including Brazil’s commitment to co-host the Warsaw Process working group on humanitarian issues and refugees, which will take place in Brazil February 5-6, 2020, as part of the Ministerial to Advance Peace and Security in the Middle East.

Under Secretary Thompson reaffirmed Brazil’s official status as a Major Non-NATO Ally; announced the upcoming Political-Military Dialogue in October; highlighted new U.S. support for programming to combat environmental crimes; stressed the importance of global efforts to combat nuclear and chemical and biological weapons proliferation; and discussed the importance of a vibrant, diverse and secure 5G ecosystem.