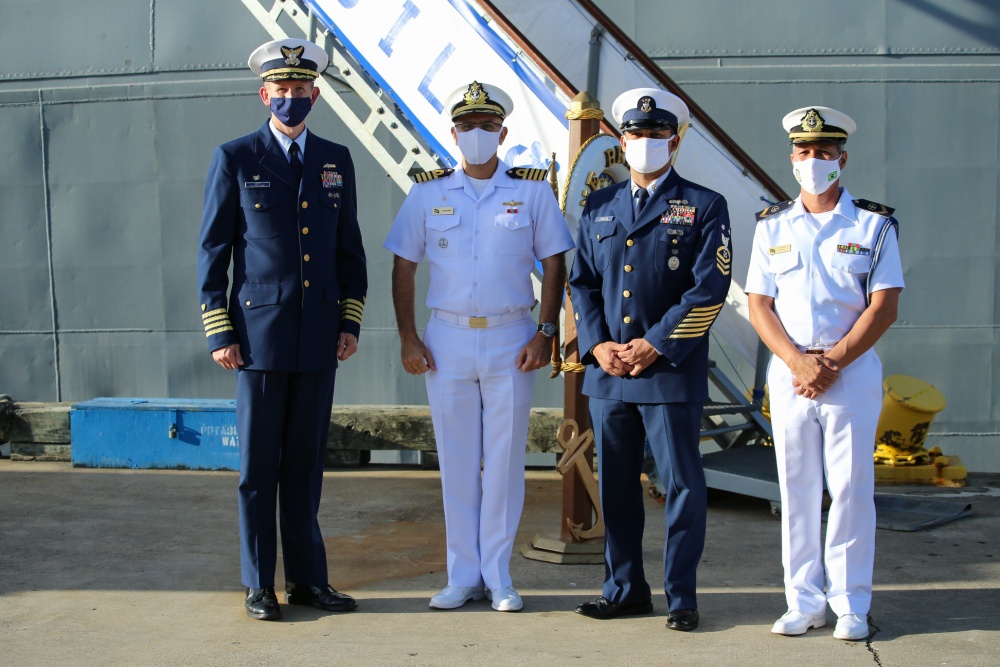 Brasília, 2 de dezembro de 2020 – The Coast Guard hosted members of the Brazilian Navy on three occasions in November throughout the Southeastern United States.

On Nov. 15, USCGC Charles Sexton (WPC 1108) participated in a wreath-laying ceremony with the NE Brasil (U27) and USS Zephyr (PC 8) near Key West, Fla. The ceremony was in remembrance of the loss of the R-12 submarine (SS 89). On June 12, 1943, the R-12 foundered while conducting a practice approach resulting in the death of the 40 sailors and two Brazilian observers aboard.

“We sincerely appreciate the NE Brasil (U27) leadership’s hospitality and willingness to engage,” said Vice Adm. Steven Poulin, commander, Coast Guard Atlantic Area. “While international engagements have been difficult due to COVID-19, the U.S. Coast Guard’s desire and enthusiasm for engagements with partners has not waned. Our ability to safely and effectively sustain international partnerships, with the close support of U.S. interagency partners such as the State Department, is critically important. The work we do together is too important to delay. These engagements help lay the foundation for further operations in the coming months.”

U.S. Ambassador to Brazil, Todd Chapman, said, “The United States and Brazil share a relationship spanning over two centuries. We continue the work of deepening that relationship and expanding it as we face new challenges for both our countries. The engagement by Brazil with our Coast Guard is one more example of this effort to ensure our partnership delivers tangible results for U.S. and Brazilian citizens.”

“This effort builds on our existing staff talks and provides additional links for more at our regional and tactical unit levels. Our mutual areas of understanding, trust, and partnership enhance the effectiveness of our efforts. Further, these efforts help all parties improve maritime stewardship and economic prosperity for both our nations. These ongoing talks and communique may be virtual when necessary, but we look forward to the value they provide and to building on Maritime Staff Talks in August, 2021.”