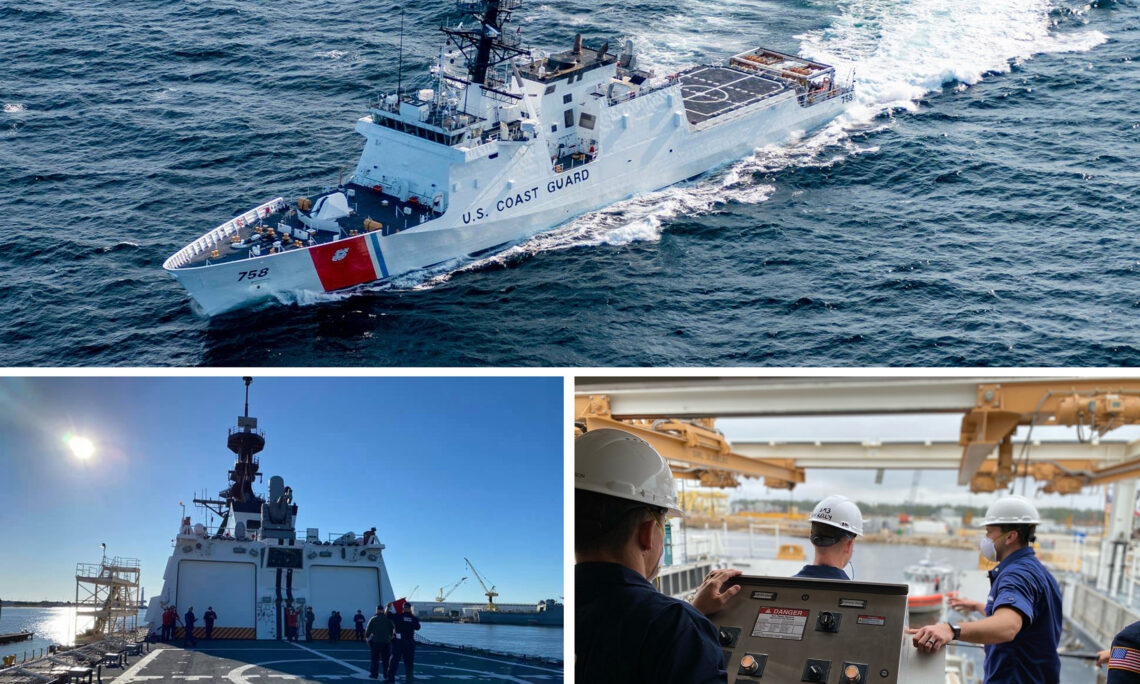 PORTSMOUTH, Va. — The USCGC Stone (WMSL 758) crew arrived in their homeport of North Charleston, S.C., Monday, following the conclusion of the Operation Southern Cross, a patrol to the South Atlantic in support of counter illegal, unreported, and unregulated fishing.

Taking the newly-accepted cutter on its shakedown cruise, Stone’s crew covered over 21,000 miles (18,250 nautical miles) over 68 days. A mutual interest in combating IUUF activities offered an opportunity to collaborate for Stone’s crew. They interacted with partners in Guyana, Brazil, Uruguay, and Portugal, strengthening relationships and laying the foundation for increased partnerships to counter illicit maritime activity.

“I could not be more proud of this crew. It was no easy feat to assemble a crew and ready a cutter for sea, but to do so in a COVID-19 environment followed by a two-month patrol is truly quite amazing. While at sea, we completed all patrol objectives and strategic engagements with like-minded partners. Our crew training was balanced with shining a big spotlight on illegal fishing practices in the South Atlantic. We arrived at our homeport on Monday after nearly five months away from families and will now receive some well-deserved rest,” said Capt. Adam Morrison, the Stone’s commanding officer.
Even before leaving the pier, the Stone set milestones. They are the first U.S. Coast Guard cutter with a Portuguese navy member to serve aboard. Lt. Miguel Dias Pinheiro, a Portuguese navy helicopter pilot, joined the Stone’s crew for the entirety of their first patrol.

Pinheiro served as both an observer and a linguist for daily operations. Further, he lent shipboard aviation experience. On this patrol, Stone certified their flight deck for aviation operations and embarked an aviation detachment from Air Station Houston. His participation in the patrol has already led to reciprocal activity with Portugal.

“Working with our partner nations has not only strengthened our working relationships but has allowed the crew of the Stone to conduct training evolutions that we don’t often get to do,” said Lt. Cmdr. Jason McCarthey, the Stone’s operations officer.

While in transit to conduct joint operations off Guyana’s coast, Stone encountered and interdicted a suspected narcotic trafficking vessel south of the Dominican Republic. Having stopped the illicit activity, Stone handed off the case to the USCGC Raymond Evans (WPC 1110), a fast response cutter from Key West, Florida, and continued their patrol south.

Stone’s team practiced communications with the Guyana Defense Force during a fast-paced interdiction scenario. This evolution required focus and attention on both sides of the radio.

In Brazil, the crew practiced communications and steaming in close formation, an essential skill for joint and combined operations. Stone’s team also gave presentations to the Brazil navy members on maritime law enforcement practices and tactics.

“Having the opportunity to work together and exchange ideas helps us all become more proficient in achieving our shared goals,” said McCarthey.

Stone was the first U.S. Coast Guard cutter to call in Uruguay in over a decade. Stone’s crew familiarized their hosts on the Coast Guard’s full range of mission and operations, answering technical questions and sharing best practices. Uruguay expressed further interest in additional professional exchange opportunities and joint operations in the future.

The Stone crew were given a unique opportunity to forge new bonds and strengthen the foundations of previous alliances in the face of a global crisis and did so through in-person and virtual engagement, conscious of the risks involved.

“We are very keen to not only negotiate international agreements to address IUU fishing, as we did with the Port State Measures Agreement. We’re also very supportive of the work Coast Guard is doing to build relationships and strengthen the operational effectiveness of all of the coastal states to combat IUU fishing,” said David Hogan, acting director of The Office of Marine Conservation, Bureau of Oceans and International Environmental and Scientific Affairs, U.S. Department of State.

Stone’s crew now prepares for their commissioning on March 19.

The cutter’s namesake is the late Cmdr. Elmer “Archie” Fowler Stone, who in 1917 became the Coast Guard’s first aviator and, two years later, was one of two pilots to successfully make a transatlantic flight in a Navy seaplane landing in Portugal.