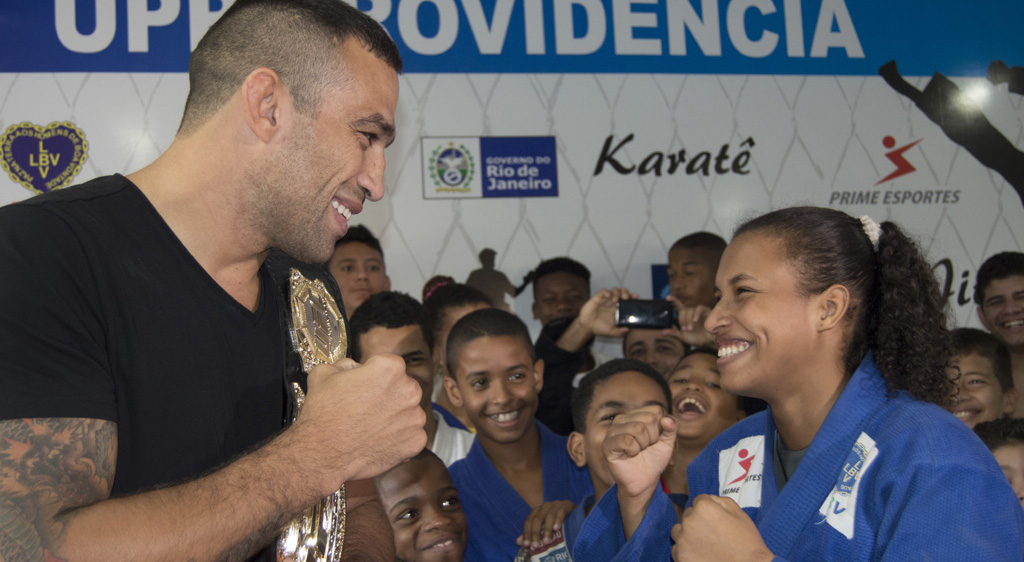 The U.S. Consulate General in Rio de Janeiro, in partnership with Ultimate Fighting Championship (UFC) and the Pacifying Police Unit (UPP), brought two renowned Brazilian fighters to the community of Providência. Fabrício Werdum, world heavyweight champion, andThomas Almeida, who competes in the bantamweight category, visited the headquarters of UPP Providência on July 30, 2015. The athletes met students from the project Geração UPP, which offers judo and jiu-jitsu classes for about 350 students starting from age 4.

“Geração UPP is a preventive project to divert young people from crime. Sport is the shortest route for prevention because the child feels inserted into society and learns cultural and ethical values. The athletes’ visit shows it is possible to succeed in life through sport and conquer things they would never be able to if they were involved with crime or drugs” – said the commander of the UPP Providência, Captain Roberto Valente.

Werdun, also known as “Cavalo,” brought the world heavyweight title belt. He talked about his life experiences, gave fighting tips, and grappled with some of the children in attendance.

“Meeting these young people from Geração UPP, knowing they want to one day get where I am, is an extra motivation to train, dedicate and fight. I started as a white belt, and now I am the world champion of the UFC. I’m sure any of them, if they want it, strive for it and believe in it, can achieve as well” – said the fighter.

The U.S. Consul General in Rio de Janeiro, James Story, explained that the objective of the partnership is to provide opportunities for residents of communities.

“This partnership is a way to show these children that they have many opportunities in life. Here, they can do schoolwork, sports, reading. You cannot think about sport without the classroom” – said Story.

Winner of 38 medals and the Brazilian jiu-jitsu champion in the lightweight category, Kauan da Silva Santos, 11, dreams of becoming a professional fighter.

“In training we will remember everything that Werdum said, and it will inspire us to fight well. I want to be a professional fighter and be an influence in the UFC, just like him” – said the boy.