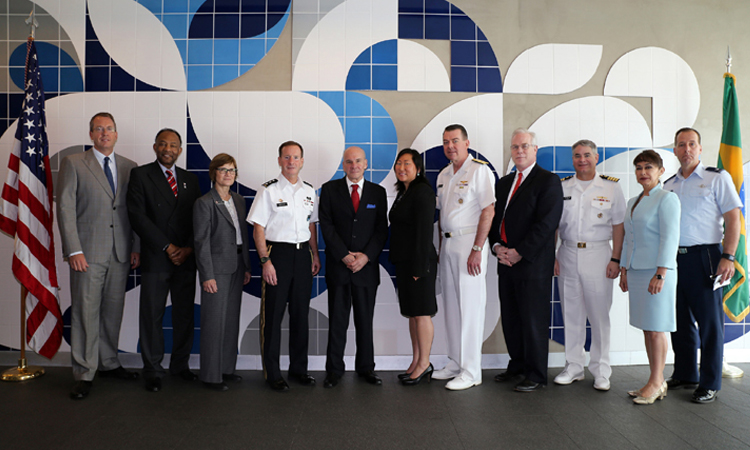 Members of the 2017 U.S. LAAD Delegation

Brazil and the U.S. reaffirm their commitment to deepening commercial defense cooperation.

Rio de Janeiro, April 5, 2017 – The United States is committed to broadening and deepening its defense partnership with Brazil, including encouraging greater partnership between the two defense industries.  As part of this effort, a high-level delegation of U.S. officials from the Departments of Defense, State, and Commerce, led by U.S. Ambassador to Brazil Ambassador P. Michael McKinley, attended the biennial Latin American Aerospace and Defense Expo (LAAD), the largest conference and international trade fair dedicated to the Latin American armed forces and defense industries.  The fair, which took place in Rio de Janeiro April 4-7, brought together delegations from more than 90 countries.

The delegation’s participation underscored the robust global partnership that exists between the Brazilian and U.S. militaries, as demonstrated by the recent signing of the Master Information Exchange Agreement (MIEA) that will provide for the expansion of research and development collaboration, and open up the possibility for development of new and innovative defense technologies.

Prior to the start of the fair, the delegation met with stakeholders from the Brazil-U.S. Defense Industry Dialogue to review progress since the inaugural meeting in Brasilia last September and to look toward the next formal iteration of the Dialogue in the fall of this year in Washington, D.C.  During the meeting, both governments reaffirmed their commitment to the process and to setting the stage for deeper commercial defense cooperation.  Speaking of the importance of the Dialogue, Ambassador McKinley said that it “is an opportunity to better integrate industry into our already strong defense relationship, to identify opportunities for concrete partnerships, to eliminate obstacles, and to encourage trade and investment.”

During LAAD, the delegation visited the fair, touring a number of the more than 40 U.S. exhibitors’ booths, witnessed the signing of a partnership agreement between American firm Rockwell-Collins and Brazil’s Embraer/Savis, and participated in a panel organized by Boeing about “Women in Defense and Aviation.”  Members of the delegation also participated in a three-hour forum focused on doing business with the U.S. defense sector and best practices for partnership.