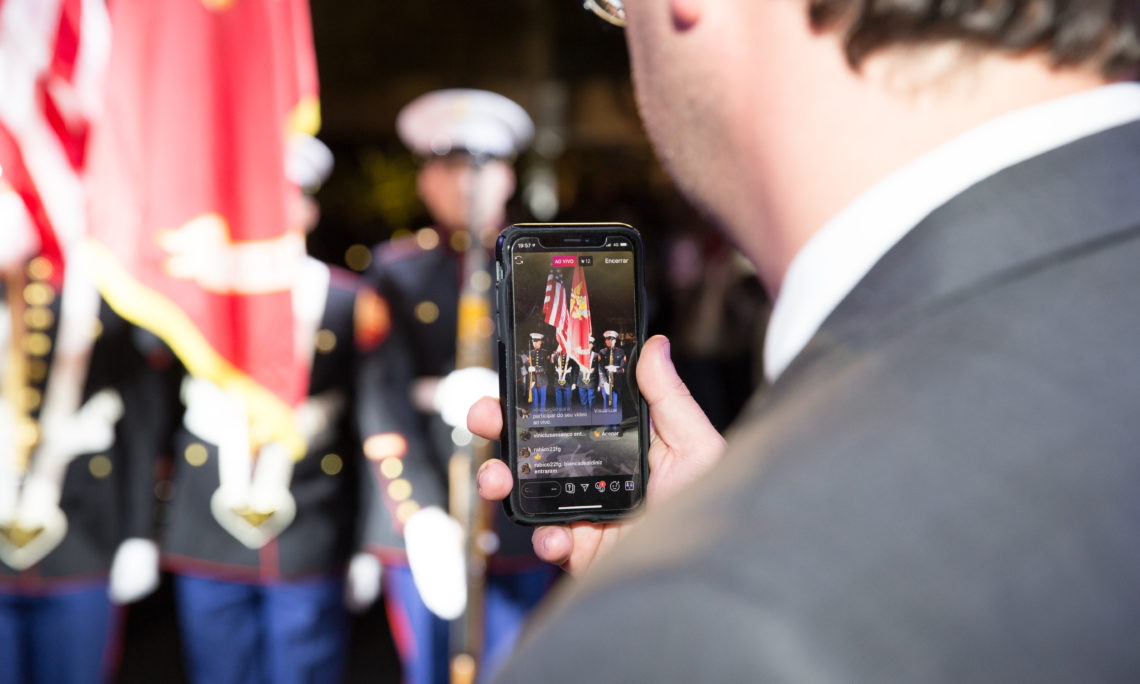 The U.S. Embassy in Brasilia, the U.S. Consulates General in São Paulo, Rio de Janeiro, Recife and Porto Alegre, and the Embassy Branch Office in Belo Horizonte separately held celebrations to mark the 243rd Independence Day of the United States of America.  Chargé d’Affaires William Popp participated at all six locations with of over 3,000 total guests.  President Jair Bolsonaro and Foreign Minister Araujo participated in the ceremony at the Embassy, and all the events included many high-level Brazilian federal, state, and local government officials and representatives from the private sector, civil society, academia and students, alumni of U.S.-sponsored exchanges, and the media.  The theme of this year’s celebration included a celebration of the 50th anniversary of the Apollo 11 moon landing, and provided an opportunity to reflect on American traditions and values, as well as our deepening and results-driven bilateral relations with Brazil.  See photos on our Flickr.

On June 25, Chargé d’Affaires William Popp and Consul General Julia Harlan hosted a reception to celebrate the Fourth of July in Porto Alegre, and announced that the United States and Brazil had agreed to designate the Consulate in Porto Alegre as a Consulate General.  In recognition of the new designation, Chargé Popp presented Consul General Harlan a commemorative plaque to mark the occasion. Ms. Harlan said in her remarks, “I have had the pleasure to travel throughout the beautiful states of Rio Grande do Sul and Santa Catarina and learn how we can continue to strengthen the already strong relationship between the United States and southern Brazil.”  To highlight the 50th anniversary of the moon landing, the event featured space decorations and food and music from the 1960s and early 1970s.  See Flickr album.

On June 26, the U.S. Consulate General in São Paulo held its 4th of July celebration at Blue Note SP, a branch of the famous jazz club from New York.  Three hundred and seventy two guests, including politicians, representatives of U.S. and Brazilian companies, alumni and other contacts and stakeholders, were greeted by Chargé d’Affaires William Popp and Consul General Adam Shub.  Consul General Shub delivered remarks highlighting the strong partnerships the Consulate has held with various institutions and the benefits brought to the district’s population, adding: “Our greatest partnership has been with the people of the southeast region: entrepreneurs, educators, artists, researchers, magistrates, students, journalists.  On this date, we celebrate and reinforce our eternal friendship, which helps us to make a better world together.” In his remarks, Chargé Popp highlighted the many advances in U.S.-Brazil bilateral relations.  The governor of Sao Paulo, João Doria, attended the event and also spoke to the guests.  The guests enjoyed performances by the Cincinnati Conservatory of Music Jazz Ensemble Quartet; Wynton Marsalis, one of the world’s greatest contemporary jazz musicians, performed in the grand finale. See Flickr album.

On June 27, the Consulate General in Rio de Janeiro held its commemoration of U.S. independence and the 50th anniversary of Neil Armstrong’s first steps on the moon at Círculo Militar da Praia Vermelha.  Chargé William Popp and Consul General Scott Hamilton welcomed Brazilian authorities, the local diplomatic corps, and partners of the U.S. Consulate to the celebration.  Consul General Hamilton led guests in a toast to the U.S.-Brazil partnership and to “the freedom to dream the impossible is possible.”  The party also featured a performance of the Brazilian and U.S. national anthems by Wal Azzolini and traditional American foods, such as apple pie and cupcakes.   See Flickr album.

On June 28, Chargé d’Affaires William Popp and Consul General John Barrett welcomed over 370 guests at a vibrant celebration of the Great American West, showcasing wine, artisanal beers, and traditional food (authentic tacos) from California.  Consul General Barrett highlighted the importance and success of its English language, STEM, and other education programs, while photos of student exchange participants were displayed on a large LED screen for the lively audience. In his remarks, the Chargé reflected on Recife’s historical significance, as the oldest U.S. consulate in the region, and praised Pernambuco’s “Ganhe o Mundo” exchange program as “the envy of every state in Brazil.”  Pernambuco State Secretary of Culture and 2018 IVLP Gilberto Freyre Neto paid homage to the deep historical ties between the United States and Brazil, including the America’s alliance with Brazil during WWII. The celebration also included singing of the national anthems by two Ganhe o Mundo students, and guests danced into the night to live rock music. See Flickr album.

On July 2, the traditional U.S. Independence Party in Belo Horizonte brought Hollywood style and American glamour to the capital of Minas Gerais with the theme of “Belowood.”  Held at the Minas Gerais Symphony Orchestra, the reception celebrated local organizations and leaders engaged in community development as the true “stars” of the event.  Public school students from NGO Ramacrisna’s Youth Orchestra provided the reception music and played both national anthems. Chargé d’Affaires Popp, together with Consul Principal Officer Rita Rico, hosted 150 guests from various parts of Minas Gerais, including Vice Governor Paulo Brant. The diplomats emphasized the importance of local partners in expanding and consolidating U.S.-Brazil relations. “The stars we are celebrating today are not the actors and actresses of Hollywood films, but the partners who work with us daily to make a difference in Minas Gerais,” said Consul Rico.  Chargé Popp ended his speech with encouragement for the U.S women’s national soccer team and Brazilian national soccer team, “Both of our national teams have matches today and here is hoping we have a bilateral win!”  His remarks proved prescient when both won their matches!  See Flickr album.

On July 3, Chargé d’Affaires Popp was joined by President Jair Bolsonaro, First Lady Michelle Bolsonaro, Foreign Minister Ernesto Araújo, President of Supreme Federal Tribunal Dias Tóffoli, and many other distinguished Brazilian government ministers, senators, deputies, and other officials, to celebrate the final in thea series of U.S. Mission Brazil’s official celebrations.  Referring to U.S.-Brazil relations, Chargé Popp mentioned in his remarks that “in the last year, our long history of partnership has become even stronger and with concrete results.”  A retrospective video was played that highlighted some historic moments in our history, as well as many of the more recent advances.  President Bolsonaro said, “Freedom is priceless. The United States and Brazil, in the most difficult times in the history of the world, have always been together“.  See Flickr album [insert hyperlink]

More than 1,200 participants attended the event, also commemorating the 50th anniversary of the Apollo 11 moon landing, highlighted by the presence also of Minister of Science, Technology, Innovation and Communication, Marcos Pontes, the first Brazilian in space.  Minister Pontes and the Charge met earlier in the day with six young Brazilians among 25 who traveled to the United States. with Embassy support and received awards at the INTEL-ISEF (International Science and Engineering Fair), the largest international STEM competition for pre-university students, held in Phoenix, Arizona, from May 13-17, 2019.  See Flickr album.