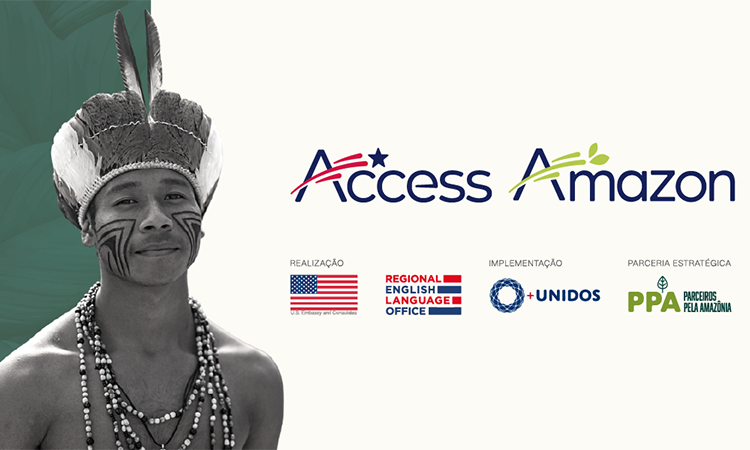 The course will address sustainability aligned to language learning

Brasília, June 27, 2022: Registration is open until July 25 for the Access Amazon program, which will teach English language to 140 indigenous people, aged 18 to 35, living in the states of Brazil’s Legal Amazon. The online course will take place from September 2022 to June 2023 and aims to expand the participants’ leadership potential and knowledge of environmental causes.

The program is an initiative of the United States Embassy and Consulates in Brazil, through the Regional English Language Office (RELO), and implementation of the +Unidos Group and strategic support from PPA – Partnership Platform for the Amazon.

If there are vacancies, in order of priority, registrations will also be accepted from activists, academics and professionals engaged in sustainability issues in the region, as well as riverside, quilombola, and indigenous residents in other regions of Brazil. Those interested must have a basic level of English to apply for the program. More info at: maisunidos.org/access_amazon.

During the virtual meetings, the participants will experience the language while sharing their experiences and practices regarding the environment and issues of the Amazon, its peoples and cultures.

“With a better command of English, they will be able to advocate for themselves and their communities on an international level and be better prepared for opportunities where the language is a prerequisite,” says RELO Director Maria Snarski.

Daniel Grynberg, Executive Director of the +Unidos Group, emphasizes that “we want to make the language have a real impact on the lives of those who live in the different states of Brazil’s Legal Amazon,” promoting social inclusion.

The English Access Microscholarship program is offered by the U.S. Department of State in more than 86 countries. In Brazil, it has already benefited more than 3,000 participants since its start in 2008. Access Amazon is another initiative of the partnership between the U.S. Embassy and Consulates and the +Unidos Group.