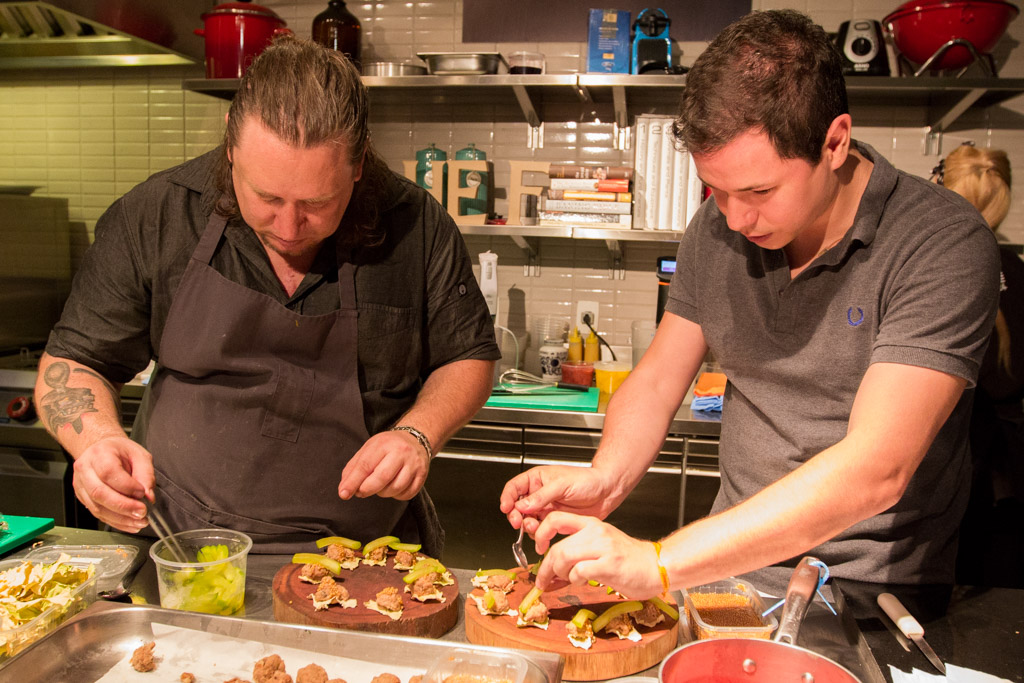 From April 17-28, the United States Diplomatic Mission in Brazil is sponsoring the visit of U.S. celebrity chef R.J. Cooper  to Belo Horizonte, São Paulo, and Rio de Janeiro, to share his award-winning interpretation of North American cuisine at several events in the three cities.  The initiative is part of the U.S. Department of State’s Diplomatic Culinary Partnership, which aims to send renowned U.S. chefs abroad to share their experiences as chefs in the United States.  Since 2012, the program has sponsored culinary demonstrations and other activities that unite people and cultures through a shared passion for good food.  Chef Cooper will be accompanied by Sao Paulo-born pastry chef Giane Cavaliere, who was named the Rising Star Chef for Pastry in 2014 by StarChefs.com.

Chef R.J. Cooper is a Detroit native whose resume spans over 20 years in some of the top kitchens in the United States. A graduate of The Culinary School at Kendall College in Chicago. In 2007, he was honored by the James Beard Foundation with the Best Chef Mid-Atlantic award for his work at Vidalia in Washington, DC. The host of the online television series “Chefs of Anarchy” and an Iron Chef America battle chef, Cooper owns Rogue 24 in Washington, D.C., a restaurant where his passion and love for the culinary craft, paired with old and new world technique, and laced with a bit of rock and roll form this three-star adventure in dining. Gypsy Soul in Fairfax, Virginia, is Chef RJ’s second restaurant that features his devotion to the American farmers.

Pastry Chef Giane Cavaliere was born in Sao Paulo and immigrated to the USA in 1994 as a student of Photography, she quickly found her true fire and passion was pastry. Her keen eye for detail and determination to become a pastry chef landed her at Posh Restaurant in Washington, D.C. She later became the pastry assistant at PS7 Restaurant, before becoming the head of the Pastry station at Rogue 24. Cavaliere was named the Rising Star Chef for Pastry in 2014 by StarChefs.com.

For more information about this Press Release, media representatives should contact the press office at the U.S. Embassy in Brasilia at BrasiliaEMBEUA@state.gov or via telephone at (61) 3312-7367 / 7350 / 7364.