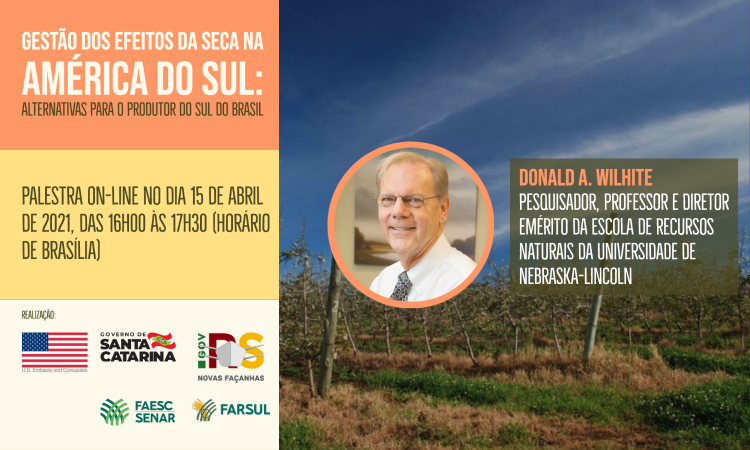 Lecture will be broadcast at no cost via Zoom and the YouTube channel of the U.S. Embassy and Consulates this Thursday at 4:00 PM

Porto Alegre, April 12, 2021 – Researcher Donald A. Wilhite, professor and emeritus director of the University of Nebraska-Lincoln School of Natural Resources, will discuss his experience with drought management in South America and share lessons that may be useful to producers in Southern Brazil. The lecture Managing the Effects of Drought in South America: Alternatives for the producer of Southern Brazil will be held this Thursday, April 15, from 4:00 to 5:30 PM (Brasilia time) via Zoom platform and transmitted by the U.S. Embassy and Consulates YouTube channel.

The event is organized by the U.S. Consulate General in Porto Alegre, with the support of the state governments of Rio Grande do Sul and Santa Catarina, the Federation of Agriculture of the State of Rio Grande do Sul (Farsul) and the Federation of Agriculture and Livestock of the State of Santa Catarina (FAESC). Those interested in participating should access the link https://bit.ly/3s2nS7l, and register by filling in the First Name, Last Name and Email Address fields and by clicking on Inscrição. The lecture, which is open to the public, will have simultaneous interpretation and time for questions.

During his career, Mr. Wilhite worked extensively in Brazil on issues related to drought management and public policies to combat drought and is currently part of the coordination of the Drought Information System project, funded by the Inter-American Development Bank. The project focuses on the development of national drought policies and plans for southern South American countries to reduce the impact of drought on agricultural production and reduce losses among farmers. His research also focuses on drought monitoring and mitigation practices, and the use of environmental information in climate change decision making processes.