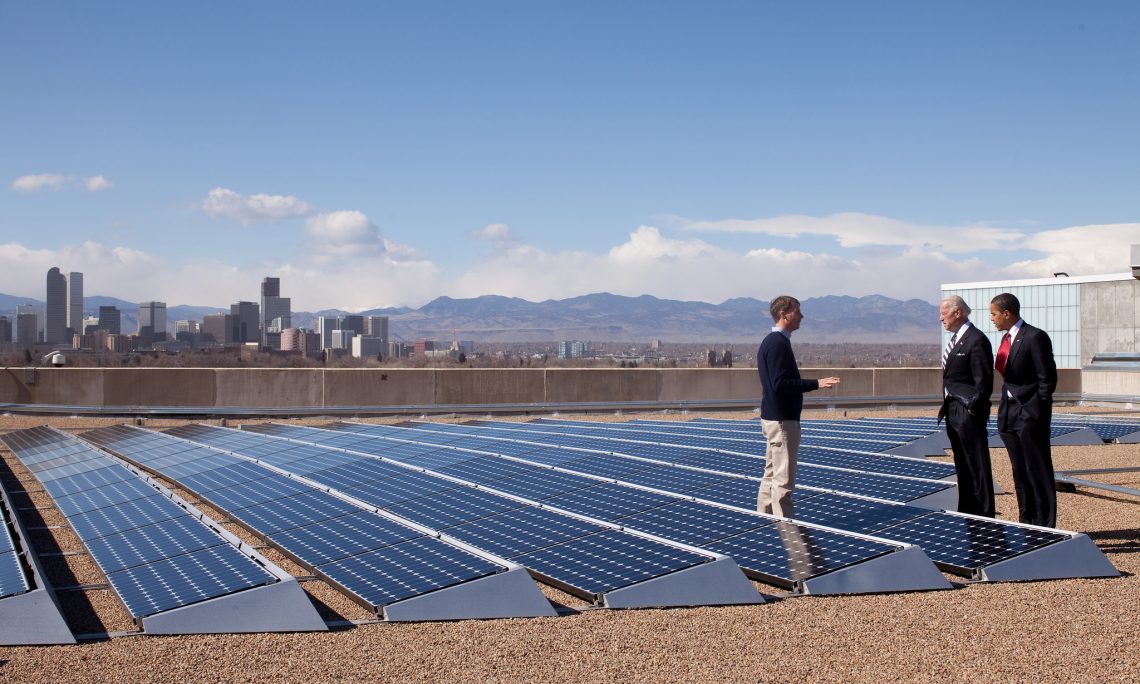 President Obama’s leadership has helped catalyze the largest investment in clean energy in U.S. history and has expanded that progress globally, providing the opportunity to advance low-carbon economies, create jobs, and establish entirely new industries that will drive global wealth and prosperity. We are already starting to see progress. Last year, the world set two new records –global investment in renewable energy was the highest ever, and, for the first time, more than half of the world’s new electric capacity came from clean sources. In addition, by 2020, global energy efficiency investment in buildings is projected to increase from $90 billion in 2014 to over $125 billion. But we have more work to do.

That is why, today, the United States is hosting global energy leaders for the first time since the Paris Agreement at the Seventh Clean Energy Ministerial (CEM7) and the inaugural Mission Innovation (MI) Ministerial in San Francisco. At the meetings, energy leaders from 23 countries and the European Union, representing 90 percent of clean energy investment and 75 percent of global carbon emissions, will take ambitious action to help implement policies and solutions to meet their countries’ climate and clean energy goals. In particular, these countries are meeting with the dual goal of accelerating the deployment of today’s clean energy technologies through the CEM and investing in innovation for the technologies of the future through Mission Innovation.

Last year, in Paris, the President and the leaders of 19 countries launched Mission Innovation, a new effort to double public investment in clean energy research and development over five years.  Today, those 20 nations, and the European Union as the newest partner, are announcing their specific plans to meet that target, and committing to invest nearly $30 billion per year in public clean energy research and development by 2021. In addition, today, at the CEM, 21 countries, the European Union, nearly 60 companies and organizations, and 10 subnational governments, are also making more than $1.5 billion in commitments to accelerate the deployment of clean energy and increase energy access – including towards three new, high-impact campaigns to promote corporate sourcing of renewables, commercial and industrial energy efficiency, and advanced cooling technologies. Today’s actions show that the transition to a clean energy future is inevitable and every sector and every level of government is involved.

This clean energy transition is reinforced by findings released today by Bloomberg New Energy Finance (BNEF) that renewable energy is expected to grow substantially in the next 25 years. In fact, globally, renewable energy installations are on track to increase more than 600 percent by 2040, adding nearly 4,900 GW of wind, solar, and other sources.  However, even with these changes, global temperatures are expected to continue to rise at an alarming pace. In fact, according to BNEF for the power sector to make its share of contributions toward limiting global temperature rise to 2 degrees Celsius, an additional 3,000 GW of renewable energy and $2.9 trillion in investment will be required over the next 25 years.

That is why today’s meeting and announcements are so important, so countries can continue to work together to accelerate the transition to the clean energy economy of tomorrow in collaboration with our smartest scientists, engineers, and entrepreneurs.

Clean Energy Investment Initiative: The United States is continuing to show our leadership in clean energy investment. In addition to our Mission Innovation commitment, one year ago, the Obama Administration announced over $4 billion in commitments by foundations, institutional investors, and other long-term investors to scale up clean-energy innovation and climate change solutions, as part of the Clean Energy Investment Initiative. Today, additional private-sector stakeholders are making new commitments to accelerate clean energy innovation and expand investment in climate solutions:

In the coming weeks, the Administration will take two new actions to further expand private-sector investment in clean energy innovation and accelerate the transition to a clean energy economy. DOE’s Clean Energy Investment Center is launching a first-of-its-kind Lab Partnering Service that will facilitate direct, streamlined access for the public to the clean-energy technology expertise of the National Laboratories. The U.S. Small Business Administration (SBA) is also publishing a draft rule to improve and permanently extend its Early Stage Small Business Investment Company (SBIC) program, focused on strengthening financing options for private funds that invest in clean energy technology companies and other early-stage, innovation-driven small businesses.

Today, we are announcing that in order to support the implementation of nationally determined contributions (NDCs) under the Paris Agreement, the Clean Energy Ministerial, an initiative that was started by the United States in 2010 and now involves 23 countries and the European Union, is launching an enhanced effort – called “CEM 2.0.” CEM 2.0 pairs high-level political engagement of energy ministers with sustained initiatives and high-visibility clean energy technology and policy campaigns to provide a powerful combination for accelerating clean energy policy and technology deployment. To support transparency and track progress, CEM members agreed to support the International Energy Agency (IEA) in taking on the role as the Secretariat.  Nine CEM members – Canada, China, Denmark, Finland, Italy, Japan, Norway, Sweden, the United States – committed to providing start-up funding to support the first three years of the new Secretariat. Also, the European Union today announces that, in cooperation with a member state, they will host CEM9 in 2018.

Today, the IEA confirmed the clean energy potential of the NDCs submitted for the Paris Agreement. Based on analysis the World Energy Outlook series, the IEA shows that full implementation by all countries of their NDCs would increase global solar generation thirty fold and wind generation seven fold, when compared with 2010. According to IEA, this level of deployment would go hand in hand with further declines in costs: by 2030, IEA anticipates the reduction in the cost of wind and solar would be more than 90 percent of that required in IEA’s 450 Scenario, a 2 degree stabilization scenario. New targets and support schemes are set to increase the renewable deployment to 2030 beyond the NDCs.

To set us down this path, Secretary Moniz and fellow ministers announced financial support for the CEM’s Clean Energy Solutions Center and additional actions to decarbonize the power sector. The ministers also announced new campaigns in three high-impact areas – corporate sourcing of renewables, commercial and industrial energy efficiency, and advanced cooling technologies – that can cut global carbon emissions while driving economic growth.  New commitments were also announced that will advance super-efficient lighting, transform power systems for the 21st century, improve energy access, and enhance the deployment of clean energy policy expertise. The commitments build on the more than 154 U.S. companies that have already joined the American Businesses Act on Climate pledge. Today’s commitments include:

Decarbonizing the Power Sector: GO15, an association of 18 of the world’s largest power grid operators, commits to working with the CEM to support programs that address operational, technological and financial challenges of power grid modernization.  The ClimateWorks Foundation announces a strategic alignment of their philanthropic programs with CEM programs that support power sector decarbonization in Mexico, India, China and other CEM member governments. The energy ministries of Canada, Mexico, and the United States also announced their intention to jointly carry out a North American Renewable Integration Study – the single largest renewable energy integration study ever undertaken.

Increasing Corporate Sourcing of Renewables: The new Corporate Sourcing of Renewables Campaign focuses on driving additional deployment of renewables across the range of CEM member countries. RE100, a global business initiative led by The Climate Group in partnership with CDP, as an action of the We Mean Business coalition, has estimated that if 1,000 of the world’s most influential businesses become 100 percent powered by renewables, they could decarbonize almost a tenth of all electricity used worldwide and cut more than 1,000Mt of CO2 every year. Already, corporate purchase of power in the United States has supported more than 8 GW of projects, up from just 0.6 GW in 2009, and globally more and more companies are seeking out clean energy. CEM member governments and partners joining the CEM campaign will work to significantly increase the number of companies powering operations with renewable energy and deploy supportive policies and resources that can help facilitate additional corporate sourcing of renewables. Today we are announcing that:

Developing Climate Smart Cooling Technologies: The new Advanced Cooling (AC) Campaign challenges governments and industry to develop and deploy at scale super-efficient, smart, climate friendly and affordable cooling technologies critical for prosperous and healthy societies furthering the goals of the Montreal Protocol. Access to cooling can improve health, productivity, economic growth, and educational outcomes. For example, improving the average efficiency of air conditioners sold in 2030 by 30 percent  could reduce emissions by up to 25 billion tons of carbon dioxide (CO2) over the lifetime of the equipment and reduce peak electricity demand by as much as 340-790 gigawatts. To help achieve this goal, today:

Improving Energy Management: The new Energy Management Campaign aims to secure 50,001 global certifications to International Organization for Standardization (ISO) 50001 by 2020. ISO 50001, the global energy management system standard, has a proven framework of requirements to transform the way organizations manage energy and meet sustainable energy goals. Approximately 15,000 facilities worldwide have been certified to ISO 50001 since its launch in 2011, realizing energy improvements of 10 percent or more, often through low-cost or no-cost changes to operations.  Broad implementation of ISO 50001 across commercial and industrial sectors globally could drive cumulative energy savings of approximately 62 exajoules by 2030, saving over $600 billion in energy costs and avoiding 6,500 Mt of CO2 emissions.  The projected annual emissions savings in the year 2030 are equivalent to removing 215 million passenger vehicles from the road per year.

Financing Programs for Clean Energy: Today, DOE is also releasing Federal Financing Programs for Clean Energy, a resource guide to U.S. government programs that support the development of clean energy projects in the U.S. and abroad.  Featuring more than thirty programs from ten agencies, the guide includes summaries and case studies of programs that can benefit private sector partners in finding capital for clean energy projects.  Now in its third edition, the guide includes financing programs for both domestic and international projects.  For every program listed, the guide identifies contact information to answer questions and provide additional direction.  The guide includes programs from the U.S. Departments of Agriculture, Energy, Housing and Urban Development, State, Transportation and Treasury, along with the Environmental Protection Agency, Overseas Private Investment Corporation, and the Small Business Administration.

Supporting subnational actions to accelerate the transition to clean energy

In order to successfully transition to the clean energy economy of tomorrow, every level of government must be involved. That is why, yesterday, the State of California hosted the first Subnational Clean Energy Ministerial and next week Beijing will host the U.S. China Climate Leaders Summit. In addition, we are announcing the following actions:

Expanding the Number of Subnational Governments  Committing to Reduce Carbon Pollution through the Under2MOU: Yesterday, Governor Jerry Brown announced 7 new signatories to the Under2MOU – City of Budapest, Hungary, Laikipia County, Kenya, City of Portland, USA, City of Sacramento, USA, City of Santiago, Chile, Telangana, India, and Veneto, Italy. Since the effort began just over one year ago, the Under2 MOU has grown to a coalition of 135 jurisdictions representing 32 countries and six continents. Together, they represent more than 780 million people and $21 trillion in GDP, equivalent to more than a quarter of the global economy. Under the agreement, signatories commit to either reducing greenhouse gas emissions 80 to 95 percent below 1990 levels by 2050 or achieving a per capita annual emission target of less than 2 metric tons by 2050. These targets allow each individual government to tailor emission reduction plans to fit regional needs.

Advancing National and Subnational Innovation in Clean Energy Finance. This week, DOE hosted a finance roundtable this week to discuss green banks and green bonds, which represent growing trends for public financial institutions at both the national and subnational levels.  At the roundtable, leading stakeholders made the following announcements advancing public innovations in clean energy finance: