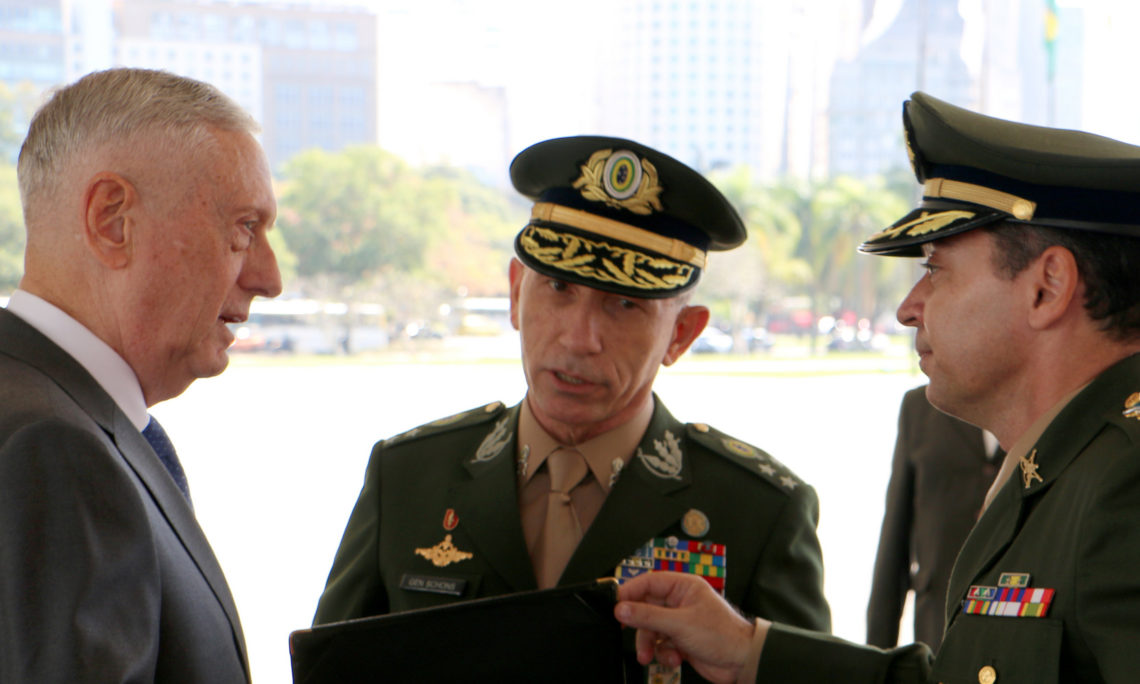 “We seek to strengthen a cooperative, strategic partnership that is transparent, trustworthy, and steady.”

Brasilia, August 14, 2018 – The Secretary of Defense of the United States, James N. Mattis, visited Brasilia on August 12-13, 2018 and Rio de Janeiro on August 14, 2018.  In Brasilia, Secretary Mattis met with Minister of External Relations Aloysio Nunes to discuss bilateral defense relations, the deteriorating situation in Venezuela, progress on bilateral agreements, and other issues of mutual interest.  Secretary Mattis also met with Minister of Defense Joaquim Silva e Luna.  The two discussed armaments cooperation, increased interoperability of the armed forces, personnel exchanges and increased collaboration in research and development, science and technology.  See here for official readouts of meetings at MRE and Ministry of Defense.

During the Secretary’s meetings with senior Brazilian officials, he pledged to strengthen bilateral cooperation, transforming the defense relationship, “building on the solid foundation we already have.”  In his speech in Rio de Janeiro, the Secretary also said: “We seek to strengthen a cooperative, strategic partnership that is transparent, trustworthy, and steady because we see a bright future ahead – for Brazil and for our hemisphere.”

The visit by Secretary Mattis showed the broad, dynamic and productive nature of the U.S.-Brazil military-to-military partnership, highlighting the shared commitment to the security of both societies.

Photos of the Secretary’s visit available on the U.S. Embassy’s Flickr: https://www.flickr.com/photos/embaixadaeua-brasil/albums/72157700160984225