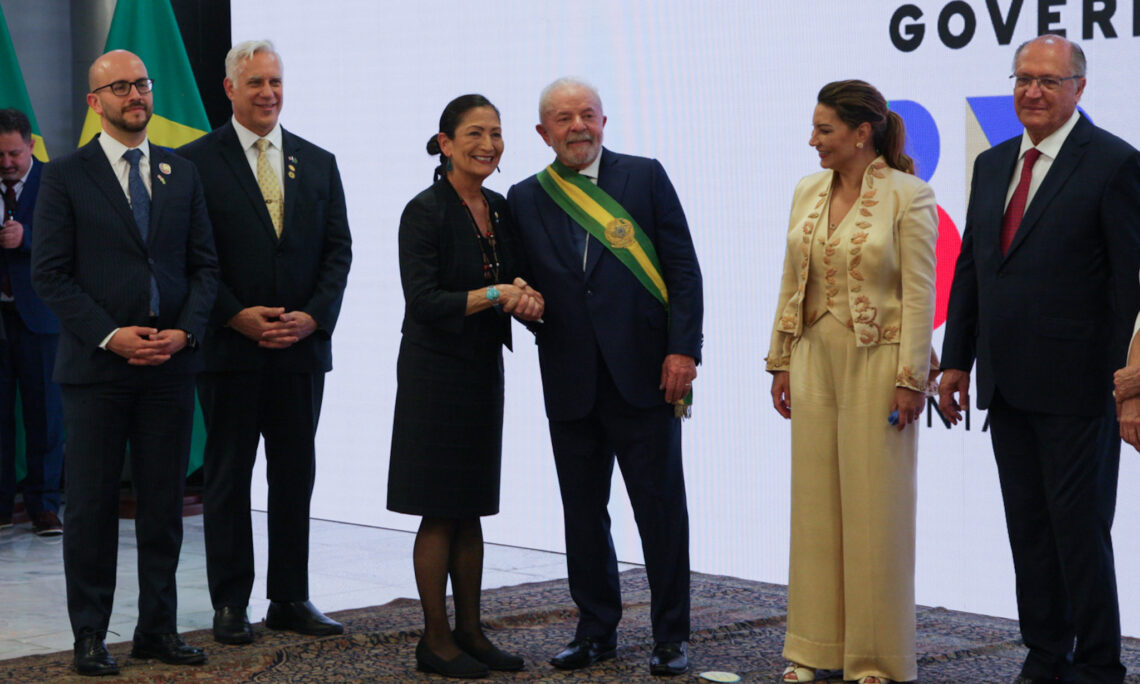 Brasília, January 1, 2023: U.S. Secretary of the Interior, Deb Haaland, led the official Presidential Delegation of the United States of America on behalf of President Joe Biden to the presidential Inauguration of His Excellency Luiz Inácio Lula da Silva, President of Brazil. Secretary Haaland was joined by Special Assistant to the President and Senior Director for Western Hemisphere Affairs at the National Security Council, Juan Gonzalez, and Chargé d’Affaires of the U.S. Embassy and Consulates in Brazil, Douglas A. Koneff. The delegation participated in all the major inaugural events and held other meetings with counterparts and partners.

“I was honored to represent President Biden, our administration, and the American people at President Lula’s inauguration and to celebrate the longstanding and important partnership between the United States and Brazil,” said Secretary Haaland. “Our shared commitment to democracy, human rights, Indigenous peoples, equitable economic growth, environmental protection, and other core values makes us natural partners. The Biden-Harris administration intends to use every opportunity to broaden and deepen that partnership with President Lula’s government in the years to come.”

In addition to attending the inauguration, Secretary Haaland met with Joênia Wapichana (President of FUNAI), Toya Manchineri (Coordinator of the Coordination of Indigenous Organizations of the Brazilian Amazon, COIAB), and other Indigenous leaders and partner institutions implementing U.S.-funded environmental programs in Brazil. In those meetings, the delegation discussed the priorities and challenges of Indigenous peoples in Brazil, opportunities to deepen collaboration between U.S. and Indigenous communities, and partnership with the U.S. Agency for International Development (USAID) to engage communities whose lives depend on the integrity and conservation of the Brazilian Amazon ecosystem.

“The United States will work closely with President Lula and his government to continue strengthening our rich bilateral relations, which have been anchored in shared values for more than 200 years. I am confident that our partnership will bring unique synergies and capabilities to build prosperity and address the challenges our countries, the region, and the world face,” stated Chargé d’Affaires Douglas A. Koneff.

The U.S. Department of the Interior has a long history of collaboration with Brazilian counterparts on a wide range of environmental and natural resources issues. The U.S. Geological Survey and Bureau of Reclamation engage in technical exchanges with the National Water Agency, on topics such as hydrologic surveys and dam safety. The U.S. Fish and Wildlife Service and National Park Service partner with the Environment and Sustainable Natural Resources Ministry on conservation and protected area management. And the Bureau of Safety and Environmental Enforcement and Bureau of Ocean Energy Management are in dialogue with counterparts in Brazil about offshore wind development and carbon sequestration. Most recently, in November the Department and the U.S. Agency for International Development facilitated a knowledge exchange between officials from six U.S. Tribes and representatives of Indigenous communities in the Amazon.