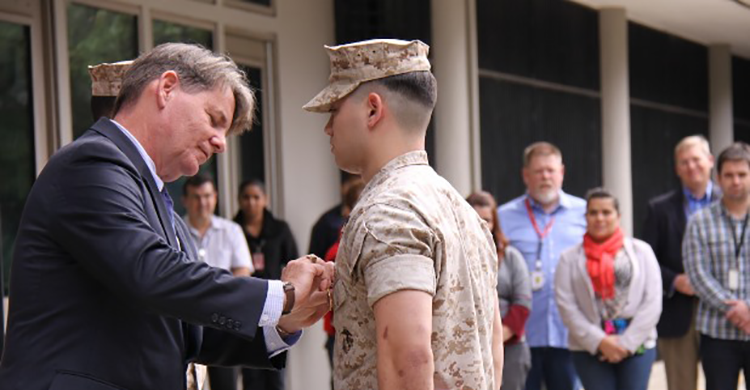 On May 14, the Consulate General in Sao Paulo hosted for the first time a Purple Heart Ceremony, in which Consul General Dennis Hankins awarded the Purple Heart medal to Sergeant Robert Hatch, one of the Marines at the Consulate.

The Purple Heart is one of the most recognized and respected medals awarded to members of the U.S. armed forces.  It’s also the nation’s oldest military award, being introduced as the “Badge of Military Merit”, by General George Washington, in 1782, and re-introduced in 1932, on the 200th anniversary of Washington’s birth.

“It’s an award that has been given to 1.7 million airmen, marines, soldiers and it recognizes those who were wounded or died in combat.  For us, at the Consulate community, it’s a great honor to have somebody in our midst who has earned this designation”, said Mr. Hankins in his speech.

Sergeant Hatch served in Afghanistan, where he was wounded, in 2014.  His parents were able to watch the ceremony via Skype and congratulate their son.  “I’m sure everyone sacrifices some way for their country.  But you, Robert, you did a little bit more.  You went to battle for your country, you were wounded.  That’s a little bit more sacrifice than what is common today.  I just want to congratulate you and thank everyone for showing up,” said his father.