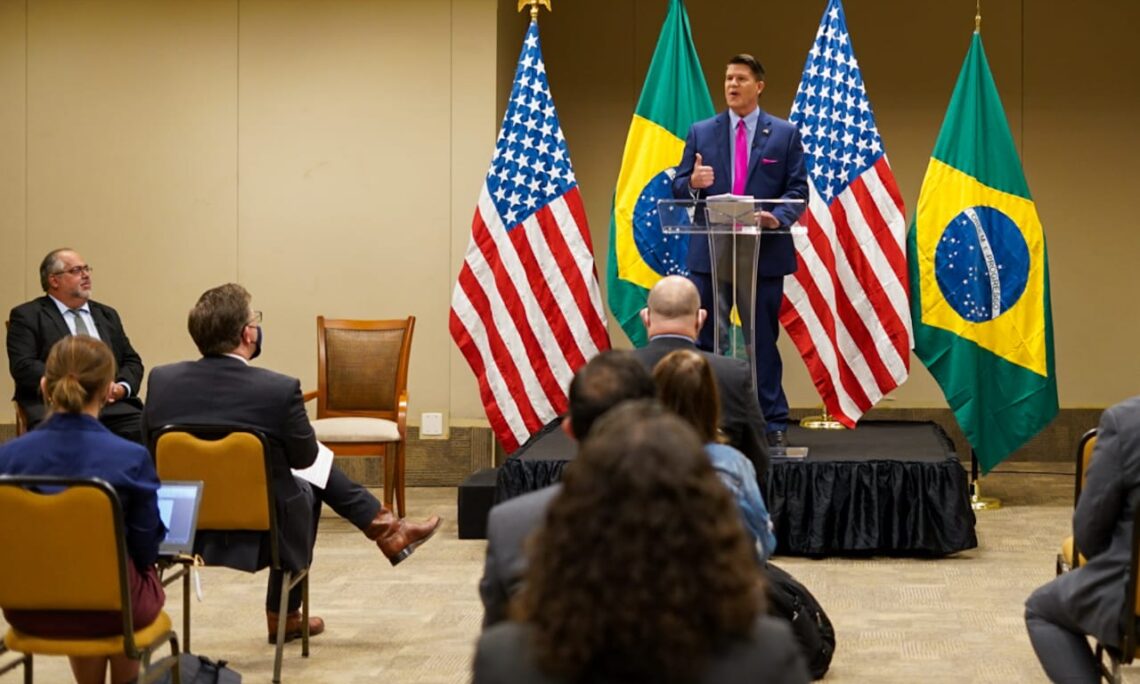 I want to give a special thanks to Welber Barral for moderating today’s discussion, and for his service to Brazil and the bilateral partnership.

Let me thank as well the Fundação Getúlio Vargas for helping us get this out to as large a group as possible.

It’s been a great honor to be here in Brazil the past several days.

I’ve gotten to see many times as a business “up close and personal” why the U.S. and Brazil have 200 years of traditioned history of friendship and the relationship between is so strong.

We talked about it many times with my good friend Ernesto Araújo and your Foreign Minister. We concluded it is a combination of 3 things:

In my role of running economic diplomacy for the United States, I have come to learn this quality is unique and not to be underestimated. We may not agree on every little detail, but we are coming from a good place.

Practically speaking, as the two largest economies and democracies in the Western Hemisphere, the United States and Brazil are natural allies.

We’ve worked together on regional challenges, helping to provide economic opportunity, supporting those fleeing repressive regimes like that of Nicolas Maduro, and ensuring the free flow of commerce.

The united Brazil-U.S. alliance is one of the best examples of a partnership of equals in the hemisphere.

And both our governments and our peoples are committed to a market-driven, private sector-led model of economic development — and to the fundamental freedoms and liberties that underpin this economic model. Those freedoms are why Brazilian talent and creativity have been a part of creating remarkable things, from co-founding Instagram with an American partner to aerospace developments, and from unmanned transportation to new crop varieties. The world needs Brazilians to lead in innovation, but also to firmly defend our shared democratic values when they are under threat.

My meetings over the last 4 days have put a human exclamation point on all of this. Yesterday I participated in a trilateral engagement with Brazil and another close ally, Japan; as well as a bilateral U.S.-Brazil dialogue on a subject that is near and dear to my heart, the environment. I’ve also had amazing private sector meetings, one with hi-tech entrepreneurs in Sao Paulo and another with the Brazilian CEOs of Fortune 500 companies from United States, Europe and Japan. Perhaps my favorite of all were the dinners and one-on-one meeting with leaders from the Brazilian government. Many of them were the ministers I hosted in my home for dinner last March.

In each of those engagements, we discussed another issue that’s near and dear to my heart: one that intersects global economic security, U.S. private sector investment in Brazil, and Brazil’s national security and technological sovereignty.

All that will be affected the massive technology paradigm shift of 5G telecommunications security.

Let me open up and share some of that with you and then I’ll be delighted to take your questions in a few minutes.

First, let me explain why this is so important to me personally.

I come from the tech sector in the United States. After being a Vice President of GM, I spent about 30 years in Silicon Valley, building and leading successful technology companies like Ariba and DocuSign. Both of them $40 billion powerhouses.

I know from experience that the intellectual property and data our countries produce constitutes the “raw wealth” of our modern technological economy — just like oil and steel were to the industrial economy, or land was to the agricultural economy.

But I also know from experience that authoritarian powers — such as the CCP — are seeking to steal and co-opt our data and IP.

I know, because China did it to me. They stole my IP on multiple occasions. Now that I am in U.S. State Department, what I have seen is beyond imagination. I didn’t even know there was a national security act that requires Chinese companies to turn over data at the Communist Party’s request.

That is why today, I am passionate about calling on our allies and like-minded partners in government and industry to join the growing tide to secure our data and national security interests from the CCP’s surveillance state and other malign entities.

Unlike other countries that use technology to build, trade, educate and inspire, the CCP uses that technology to assert and maintain social control over its citizens.

That is why I have visited 20 countries in Europe and the Middle East and now on Latin American visit with Brazil of course being my first stop.

Consensus has formed that the Chinese Communist Party cannot be trusted with our most sensitive data and intellectual property. Countries and businesses alike are pushing back against the CCP and its various appendages. They know that Huawei is the backbone of the CCP surveillance state, where data comes in but not out and, reciprocally, propaganda goes out, but the truth doesn’t come in.

That is why a trusted network of countries and companies have come together to form the Clean Network.

It is a comprehensives approach to address the long-term threat, and builds trusted collaboration posed by authoritarian regimes. It is grounded in internationally accepted trust standards and represents a long-term, enduring strategy built on a rapidly growing coalition of 50 countries, representing approximately two-thirds of the world’s GDP, along with over 170 telcos and many of the world’s most powerful high-tech companies.

The key to the Clean Network’s rapid success is that it provides strength in numbers and power in unity and solidarity to stand up to the CCP’s bullying tactics of intimidation and retaliation. With the announcement here and Secretary Pompeo’s comments in Washington yesterday, Brazil is the 50th member.

In the network, there are:

All of us—governments, business, civil society, and especially the press—have turned that tide against authoritarianism in the favor of freedom and security. There’s no sustainable prosperity without liberty.

In just a few short months, two-thirds of the world’s GDP is represented on the Clean Network.

Let me share with you why it is so important to your business community, to share quotes of why this announcement was made:

“ Having a 5G clean network is very important to fight cyber crime, data breaches, and money laundering as well as to attract investments to new value-added products and services which will require innovative solutions. A network is only as strong as its weakest link.”

“The Clean Network with open radio access network architecture will support a diversity of trusted vendors. This is good for Brazil’s economic growth, good for operators, and good for consumers. Open architecture and clean 5G will help Brazil become a global producer of network components.”

“A Clean 5G Network is not just about cell phones; it is about critical manufacturing processes, oil and gas platforms, and power networks, sanitation systems and internet of things. The Clean Network will help ensure that Brazil’s critical infrastructure – power, transportation, and sanitation systems – is safe and reliable.”

Ultimately, 5G security is a team sport: We need every free nation on board. Our chain of security is only as strong as its weakest link.

It boils down to one word —and we must ask that great, enduring question: Whom do we trust?

Trust is the most powerful word in any language. It’s the basis of every important relationship—personal, business, or otherwise. You buy from people you trust. You partner with people you trust.

The United States and Brazil trust each other. We trust Brazil will make the right 5G decision for its citizens, businesses, and ultimately its national security. And the United States will be right there by your side.