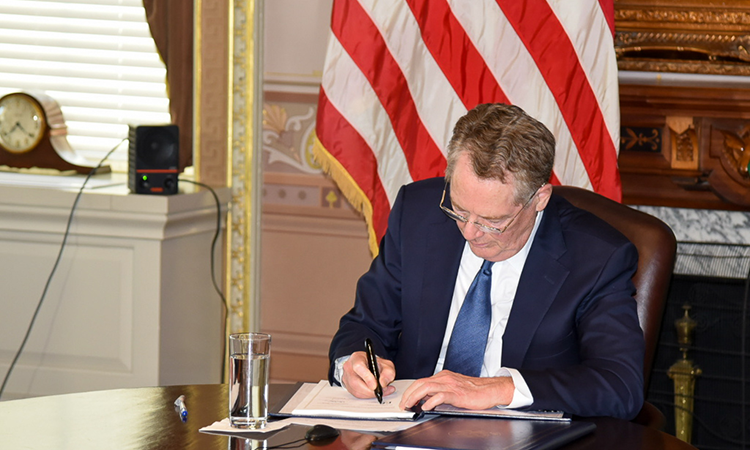 The United States and Brazil are pleased to announce the successful conclusion of a Protocol on Trade Rules and Transparency.

This agreement is the latest concrete result of the close relationship between Brazil and the United States and the leadership of President Trump and President Bolsonaro.

Following the meeting of the two leaders at Mar-a-Lago in March, the Office of the U.S. Trade Representative and Brazilian officials announced acceleration of the trade dialogue under the Brazil-U.S. Commission on Economic and Trade Relations (ATEC) and our intent to negotiate in 2020 an agreement on trade rules and transparency, including trade facilitation and good regulatory practices.

Today’s agreement updates the ATEC with new Annexes in three areas: Trade Facilitation and Customs Administration, Good Regulatory Practices, and Anti-Corruption. Together, these provisions demonstrate the countries’ mutual commitment to the fundamental elements necessary for a fair shake on trade – publishing information, giving stakeholders an opportunity to provide input on the rules, providing transparent and efficient processes at the border, and being vigilant against corruption.

The Protocol advances key standards established by Brazil and the United States in their recent negotiations. The Protocol complements Brazil’s domestic reforms to improve competitiveness and opportunities for innovation, including the Regulatory Agencies Law, the Economic Freedom Law and its succeeding presidential Decrees.

On trade facilitation, the Protocol includes key provisions on advance rulings, penalties, single window, authorized economic operator, and automation, which go well beyond the baseline of the WTO Trade Facilitation Agreement. On good regulatory practices, it is the first subsequent agreement to use the GRP framework established in the USMCA. On anti-corruption, the Protocol further expands both countries’ frameworks to include provisions addressing money laundering, the recovery of proceeds of corruption, the denial of a safe haven for foreign public officials that engage in corruption and additional protections for whistleblowers.

The new Protocol also sets the stage for future discussions to deepen and broaden work under the ATEC. The two countries will also seek to identify priority sectors to further reduce barriers to trade in a broader perspective regarding the bilateral economic and commercial relationship.

The agreement today will help all traders who seek simpler customs procedures, more opportunity to participate in development of regulations, and more confidence in the rules of the marketplace. Looking forward, the Protocol is evidence that Brazil and the United States can successfully deepen their trade relationship in ways that are beneficial to both countries.