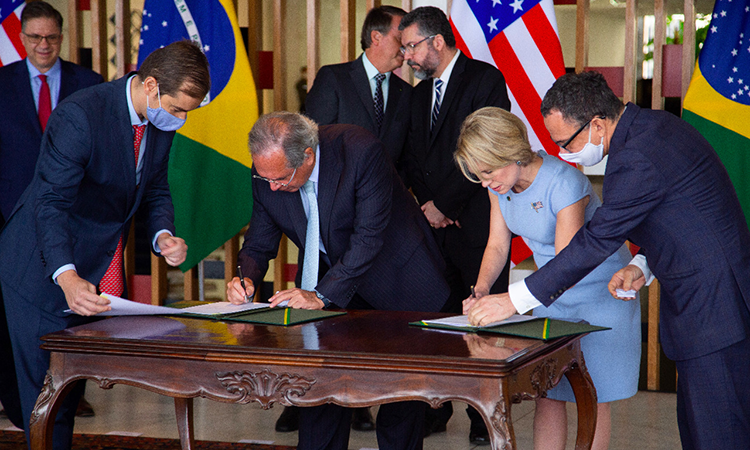 The agreement opens opportunities for business promotion in telecommunications, energy, infrastructure, and more.

Brasilia, October 20, 2020 – Export-Import Bank of the United States (EXIM) President and Chairman Kimberly A. Reed today signed a US $1 billion Memorandum of Understanding with Brazil’s Ministry of Economy, aimed at enhancing the strong trade and economic relationship between the two countries.

Under the MOU, EXIM and the Ministry of Economy  agree to explore and identify options to potentially use EXIM financing in a total aggregate amount of up to $1 billion, and to identify areas to work together to promote business development opportunities, particularly in the telecommunications (including 5G), energy (including nuclear, oil and gas, and renewables), infrastructure, logistics, mining, and manufacturing (including aircraft) industries.

This MOU is part of EXIM’s ongoing work with U.S. and Brazilian companies. EXIM is prepared to consider an application from GOL Airlines to finance the acquisition of several hundred millions of dollars of Boeing aircraft, which it is expected to take delivery of during 2021. EXIM issued a $345 million Letter of Interest in January 2020, to Westinghouse Electric for refurbishment of the Angra Nuclear Power Plant. It supported over $26 million  of sales support for Air Tractor aircraft to Brazilian farmers and spraying companies in 2020. On July 30th, 2020, EXIM provided a $97 million working capital line of credit to Embraer Executive Aircraft, a subsidiary of Embraer S.A.

ABOUT EXIM:
EXIM is an independent federal agency that provides competitive and necessary export credit to support sales of U.S. goods and services to international buyers.
For more information about EXIM, please visit www.exim.gov.