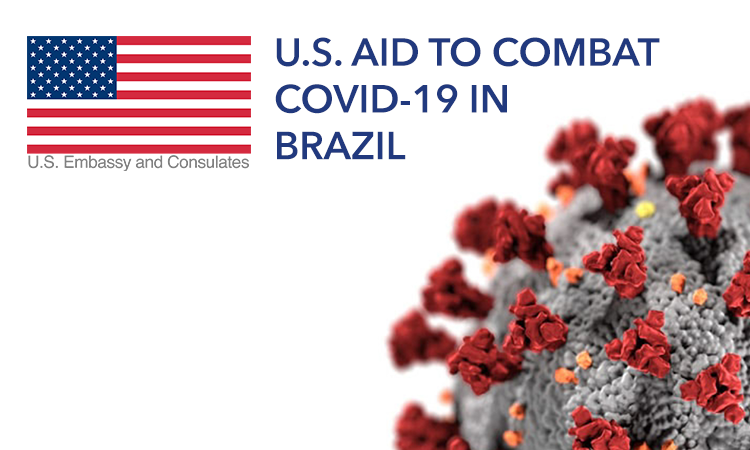 Brasilia, March 19, 2021 – The United States government and private sector are strongly committed to helping the Brazilian people to combat COVID-19 in Brazil and together have already made available over US$ 76 million (R$ 418 million) in a series of initiatives, including donation of health equipment, food, hygiene products and individual protection, in addition to projects to support entrepreneurs, artificial intelligence, and combating disinformation.

In a joint action, the American Chamber of Commerce of Brazil (Amcham), the U.S. Embassy, and the +Unidos Group conducted a survey of about 70 U.S. companies and their initiatives to combat the impacts of COVID-19 in Brazil. The cash donations announced by a part of these U.S. private sector initiatives total approximately US$ 57 million (R$ 314 million). In addition to the companies that announced cash donations, others disclosed actions without specifying monetary value, such as changing the production line, donation of licenses, credits, products, training and expertise to support Brazilians during the pandemic.

The U.S. government has already announced assistance to mitigate the health and socioeconomic impacts of COVID-19, totaling over US$19.7 million. These funds include humanitarian assistance for emergency health and water, sanitation, and hygiene interventions in Brazil (US$ 6 million). It also includes support to vulnerable communities, with a focus on the Amazon region (US$ 2 million) and for refugees in Brazil (US$ 500,000). Additional funds will also improve the detection and tracking of cases, the identification of areas of transmission, the control of outbreaks and the provision of data (US$ 3 million), as well as help mitigate the socio–economic impact on populations in risk (US$ 950,000). The U.S. Southern Command of the Department of Defense donated US$ 45,000 of personal protection equipment for medical personnel and food in Manaus and the Amazon region. Other U$ 82,000 were used to fight COVID-19 disinformation in poor communities.

In addition to funding initiatives in Brazil, the U.S. government delivered 1,000 ventilators to the Brazilian Ministry of Health. It also supported the development of the Inspire (Inhale) emergency pulmonary ventilator – low-cost and patent-free – donating US$ 200 thousand to its initial research, performed by the Polytechnic School of the University of São Paulo (Poli-USP). Now, the Brazilian Navy prepares itself to produce the equipment that will be donated to hospitals in São Paulo to assist COVID-19 patients.

“Combating COVID-19 in Brazil is our top priority right now. Working across the U.S. government and engaging closely with American companies in Brazil, we are mobilizing millions of dollars to help Brazilians in need.”

Amcham Brasil launched the SOMA initiative, ‘platform for good’, which brings together more than 220 companies, including 70 American companies and other Brazilian multinationals operating in the USA or national companies. SOMA Amcham acts as a connection hub between companies, governments, and society. The governments of São Paulo, Rio de Janeiro, Minas Gerais, Pernambuco, Bahia, and Goiás participate in the platform, as well as the Ministries of Economy, Health, and Science & Technology.

“Public-private partnerships are a powerful response to fighting the pandemic. They allow for quick action, and make the results of initiatives more effective, especially among partners with a good track record of strategic relationships, such as Brazil and the United States,” explains Deborah Vieitas, CEO of Amcham Brasil, the largest American Chamber, among 115 existing in the world.

The +Unidos Group, a collaborative social investment fund created by the U.S. Embassy, in partnership with Bank of America and the Caterpillar Foundation, launched the Support Fund UNA+. The initiative aims at identifying communities in Brazil whose situation of social vulnerability was worsened by the pandemic and proposing individual solutions in partnership with social organizations that already work on these regions, with things such as testing and food donation. Until now, the Fund has already raised R$ 5 million from the private sector and equipped 19 ICU beds, distributed more than 70 thousand PPE’s and benefited 20 thousand people. The Fund’s target is to mobilize the private sector to raise up to R$ 10 million to benefit 50 thousand people. Private companies interested in joining the initiative may contact the committee at https://maisunidos.org/unamais/.

Four hundred of the five hundred largest companies in the United States are in Brazil. For the full list of companies and initiatives visit the websites of the U.S. Embassy, Amcham and +Unidos Group.