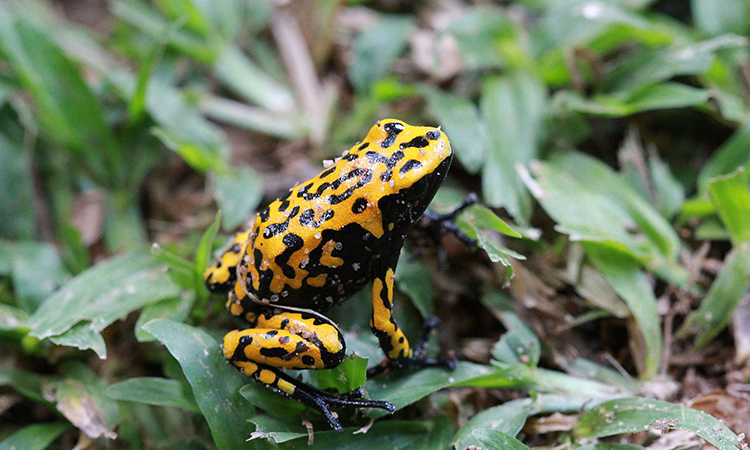 The frogs had been trafficked into the United States in late 2017 and were seized at the Miami International Airport. Wildlife inspectors asked experts at Disney’s Animal Kingdom to care for the frogs as they investigated and pursued forfeiture of the frogs under the U.S. Lacey Act.

“I am very proud of the Service’s role in returning home these incredibly rare and protected blue morph species of the splash-backed poison frog,” said Assistant Director of the U.S. Fish and Wildlife Service Office of Law Enforcement, Edward Grace.  “This remarkable journey was due to the diligence of our wildlife inspectors and our Brazil attaché working closely with our federal, international, and private partners. Thanks to their work, these frogs were rescued from the illegal pet trade, cared for by Disney, and then returned home to Brazil where they belong.”

Dr. Mark Penning, Vice President, Disney’s Animals, Science and Environment, Disney Parks, added that: “At Disney, we are committed to protecting wildlife around the world. When the U.S. Fish and Wildlife Service reached out to us, we were compelled to jump in and help since we knew we could provide the best possible care for these frogs until they could eventually make their journey back home.”

For more than two years, the frogs were cared for at Disney’s Animal Kingdom, and are now being sent home to Brazil where they will be cared for at the Sao Paulo Zoo (Fundação Parque Zoológico de São Paulo), an institution with expertise in the care and reproduction of amphibians, with pioneering conservation programs. The Zoo has 246 animals from 11 Amphibia class species, two of which are endangered species.

Their return is a partnership between the U.S. Fish and Wildlife Service and Brazilian authorities that fight illegal wildlife trafficking, such as Brazil’s Institute of the Environment and Renewable Natural Resources (IBAMA).  More than two years ago, a commercial import of splash-backed poison frogs arrived at Miami International Airport. U.S. Fish and Wildlife Service Wildlife Inspectors examined the shipment and found out it was endemic to the Southern tributaries of the Amazon River. The species is named based on their unique ability to excrete toxic poisons as a protection mechanism in the wild, and often utilized by indigenous people, who use the toxins to coat darts and arrowheads to increase success in subsistence hunting.

“I’m really glad this operation was successful. Many people don’t know it, but the wildlife trafficking market is huge. The U.S. Embassy and Consulates in Brazil have been actively engaging on this issue”, said U.S. Consul-general in Sao Paulo Adam Shub.

Under Brazilian law, it is unlawful to remove these species from their native habitat, sell them commercially, or even possess them in captivity absent express permissions from the environmental authority in Brazil, IBAMA, which typically is granted only to scientific institutions.  In addition, these species are further protected internationally, listed under Appendix II of the Convention on the International Trade in Endangered Species of Flora and Fauna (CITES).   IBAMA is the implementing body of Brazil’s National Environmental Policy as well as CITES’ administrative and scientific authority.

“Brazil is one of the world’s five megadiverse countries. This type of initiative shows the importance of adopting measures to protect animals and of bilateral cooperation to carry out operations such as this one,” stated IBAMA’s president Eduardo Bim.  “We are committed with a relentless fight against international wildlife trafficking.”

Care at the São Paulo Zoo

At the Zoo, the animals will remain in quarantine for three weeks, where they will undergo health monitoring and adaptation through routine inspections and lab exams. The frogs will be placed in rooms that meet the environmental needs of their species, such as temperature, moisture, shelter, substrate and vegetation. They will be fed daily with insects, crickets, fruit flies and vitamins.

After the quarantine, the frogs will be incorporated into the population of the same species the Zoo already has from different colors and will be transferred to the educational room called “The Frog Leap.” The public will be able to visit the new unique residents as soon as the pandemic situation allows visits in closed spaces.

Amphibians normally have discrete colors that allow them to camouflage in the environment in which they live. But these poison dart frogs have strong colors as a signal to predators that they are not tasty and can be harmful. Their skin is covered by toxins that vary from type and intensity. The frogs that just returned to Brazil are blue (19) and orange (2).

“In the last decade, the São Paulo Zoo Park Foundation has been concentrating its efforts on the protection of amphibious. In addition to environmental education and scientific research, the institution develops conservation activities targeted at endangered species, hosting the only conversation ex situ activities with amphibious in Brazil,” said São Paulo Zoo Park Foundation’s CEO Paulo Magalhaes. “We have expertise in working with amphibians and when we were received the offer to care for the 21 frogs , we accepted right away, participating since the beginning, in the operation to return the frogs to their true home, Brazil.”

In the process of trafficking these animals to fulfill demand in the illicit pet trade, nearly a dozen perished, while the countless offspring, if only left in the wild, will never be known. The journey of these frogs highlights the importance of private/public partnerships and international collaboration to combat global wildlife trafficking and protect and conserve critically endangered species.