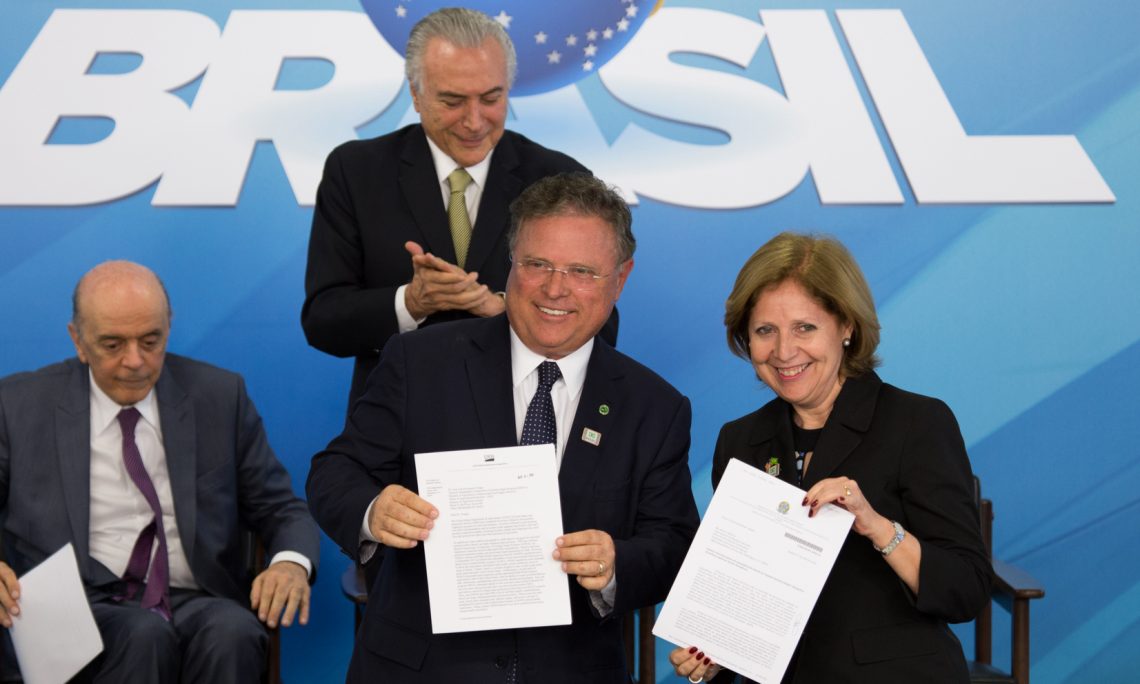 WASHINGTON, Aug. 1, 2016 – The U.S. Department of Agriculture (USDA) has reached agreement with Brazil’s Ministry of Agriculture, Livestock and Food Supply to allow access for U.S. beef and beef products to the Brazilian market for the first time since 2003. Brazil’s action reflects the United States’ negligible risk classification for bovine spongiform encephalopathy (BSE) by the World Organization for Animal Health (OIE) and aligns Brazil’s regulations to the OIE’s scientific international animal health guidelines.

“After many years of diligently working to regain access to the Brazilian market, the United States welcomes the news that Brazil has removed all barriers to U.S. beef and beef product exports,” said Agriculture Secretary Tom Vilsack. “We are pleased that Brazil, a major agricultural producing and trading country, has aligned with science-based international standards, and we encourage other nations to do the same. Since last year alone, USDA has eliminated BSE-related restrictions in 16 countries, regaining market access for U.S. beef and pumping hundreds-of-millions of dollars into the American economy.

In a separate decision,  USDA’s Food Safety and Inspection Service (FSIS) also recently determined that Brazil’s food safety system governing meat products remains equivalent to that of the United States and that fresh (chilled or frozen) beef can be safely imported from Brazil. Following a multi-year science based review consistent with U.S. food safety regulations for countries that export meat, poultry and egg products to the U.S., FSIS is amending the list of eligible countries and products authorized for export to the United States to allow fresh (chilled or frozen) beef from Brazil.

The Brazilian agreement is just the latest example of USDA’s ongoing efforts to knock down barriers to U.S. exports. In 2016 alone, these efforts have led to the reopening of the Saudi Arabian and Peruvian markets for U.S. beef, the South Korean market for U.S. poultry, and the South African market for U.S. poultry, pork and beef. In 2015, U.S. beef exports reached $6.3 billion thanks to aggressive efforts by USDA to eliminate BSE-related restrictions in 16 countries since January 2015, gaining additional market access for U.S. beef in Colombia, Costa Rica, Egypt, Guatemala, Iraq, Lebanon, Macau, New Zealand, Peru, Philippines, Saint Lucia, Singapore, South Africa, Ukraine, Vietnam and, now, Brazil.

The past seven years have represented the strongest period in history for American agricultural exports, with international sales of U.S. farm and food products totaling $911.4 billion between fiscal years 2009 and 2015.

Since 2009, USDA has worked to strengthen and support American agriculture, an industry that supports one in 11 American jobs, provides American consumers with more than 80 percent of the food we consume, ensures that Americans spend less of their paychecks at the grocery store than most people in other countries, and supports markets for homegrown renewable energy and materials. USDA has also provided $5.6 billion in disaster relief to farmers and ranchers; expanded risk management tools with products like Whole Farm Revenue Protection; and helped farm businesses grow with $36 billion in farm credit. The Department has engaged its resources to support a strong next generation of farmers and ranchers by improving access to land and capital; building new markets and market opportunities; and extending new conservation opportunities. USDA has developed new markets for rural-made products, including more than 2,500 biobased products through USDA’s BioPreferred program; and invested $64 billion in infrastructure and community facilities to help improve the quality of life in rural America. For more information, visit www.usda.gov/results.