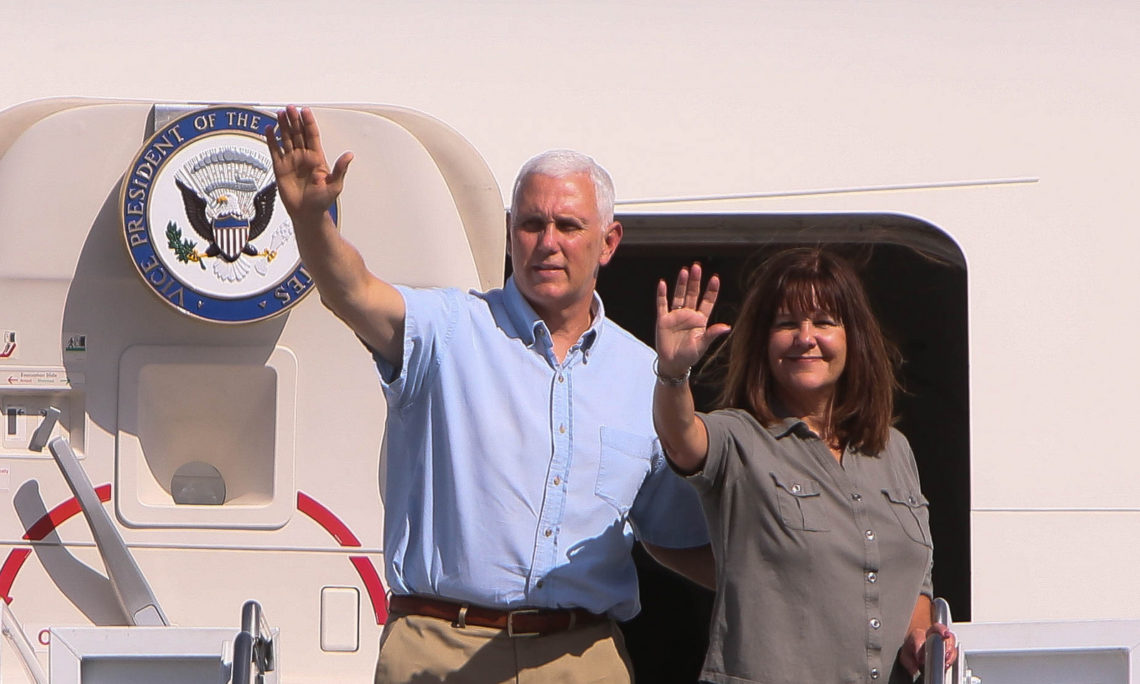 Vice President of the United States Mike Pence and Second Lady Karen Pence visited Brasilia on June 26 and Manaus on June 27, 2018, highlighting progress in several areas of bilateral cooperation and the excellent relationship between the United States and Brazil.

In Brasilia, Vice President Pence met with Brazilian President Michel Temer in Planalto, accompanied by high-level government officials, to discuss expanding bilateral cooperation in strategic areas, as well as regional and global issues.  In particular, they discussed U.S.-Brazil cooperation on the peaceful uses of outer space, including human space flight, space science, civil space endeavors, the establishment of Brazil’s Committee for the Development of the Brazilian Space Program and the re-establishment of the United States National Space Council, chaired by the Vice President.  They also welcomed the understanding between the Brazilian Space Agency and the National Aeronautics and Space Administration (NASA) for cooperation on the Scintillation Prediction Observation Research Task (SPORT).  For more information, please see the Joint Communiqué on Brazil-U.S. Space Cooperation.

Vice President Pence and President Temer also participated in a working lunch and a joint press statement at Itamaraty.  The two discussed the crisis in Venezuela and its impact on countries in the region, including Brazil.  The Vice President expressed gratitude for Brazil’s generosity and compassion in hosting more than 50,000 Venezuelans who have fled to Brazil.  He announced that the United States would provide nearly $10 million in additional humanitarian assistance for Venezuelans who have fled the crisis in their country, of which more than $1 million will go directly to Brazil.  For more information on the announcement, read here.

On June 27, the Vice President and Second Lady flew to Manaus to visit the Santa Catarina de Sena Welcome Center, one of three humanitarian such centers in the city.  The center was inaugurated on May 4, 2018 with the arrival of 126 Venezuelan men, women and children due to increasing demand.  While the number varies frequently, the Center holds up to 120 and is often close to capacity.

At the Welcome Center, Vice President Pence was greeted by the Catholic Archbishop of Manaus Dom Sergio Eduardo Castriani, UNHCR Country Representative Isabel Marquez, Santa Catarina Parish Priest Frei Alex Assunção da Silva, and UNHCR Protection Assistant Juliana Serra.  At a pavilion on the center grounds, the Vice President and Mrs. Pence met with children and spoke with a few families to learn first-hand about their experiences fleeing Venezuela.  The Vice President also spoke with an audience of the Santa Catarina center residents, Caritas and UNHCR staff and local volunteers, and members of the local public, about U.S. assistance to the region in response to the crisis in Venezuela.  Read the Remarks at Welcome Center.

While in Brasilia, the Second Lady highlighted the Sister Cities partnership between Brasilia and Washington, D.C. with a tree planting at Espaço Israel Pinheiro.  First Lady Marcia Rollemberg, wife of the Federal District of Brasilia Governor, took part in the ceremony.  Founded in 1956, Sister Cities International has worked to create relationships based on cultural, educational, information and trade exchanges.  These ties renew and strengthen global relationships through citizen diplomacy efforts throughout the United States, promoting peace through mutual respect, understanding and cooperation – one individual, one community at a time.   For more information on this event, see here.

Both the Vice President and President Temer discussed shared common values, a respect for democracy, cultural ties, and a determination to increase economic opportunities for our peoples.  The visit by Vice President Pence showed the broad, dynamic and productive nature of the U.S.-Brazil partnership, and a joint commitment to undertake further initiatives that promote the security and economic prosperity of both societies.