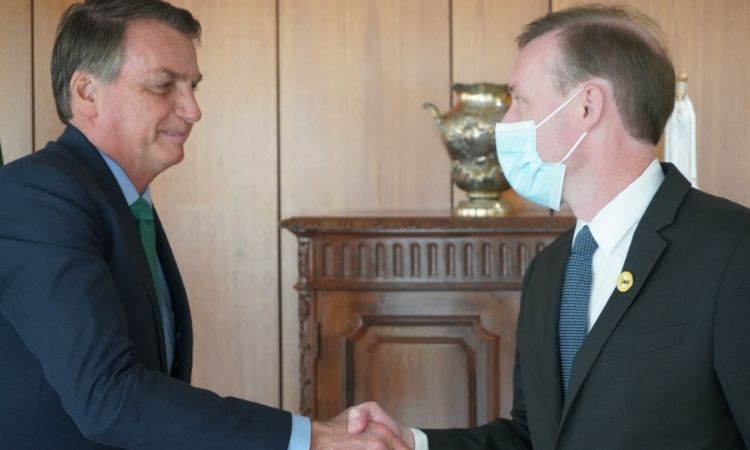 The U.S. and Brazilian officials reaffirmed the longstanding strategic relationship between the two countries and reviewed priority issues, with a  particular focus on how the U.S.-Brazil partnership can support regional security and democracy, digital and information security, cooperation in the South Atlantic, discouraging irregular migration, and the need for increased cooperation and engagement to combat climate change. Officials also highlighted opportunities for U.S. and Brazilian institutions to collaborate on combating COVID-19 and improving vaccine access.

At the start of the visit, President Jair Bolsonaro received Advisor Sullivan at Planalto Palace. This meeting was followed by high-level discussions with Special Secretary for Strategic Affairs of the Presidency of the Republic of Brazil Almirante Flávio Rocha. Mr. Sullivan also met with Minister of Defense General Walter Braga Netto; Minister of Communications, Fábio Faria; and Chief-Minister of the Institutional Security Office of the Presidency of the Republic, General Augusto Heleno and Minister of Foreign Affairs Ambassador Carlos Alberto França. He also attended a working lunch hosted by Minister  França and included the participation of Vice-President Hamilton Mourão and other Brazilian dignitaries at Itamaraty Palace.

In the afternoon, Advisor Sullivan met with members of the Consortium of Amazon Governors: Pará Governor Hélder Barbalho, Rondônia Governor Marcos José Rocha dos Santos, and Amazonas Governor Wilson Lima to discuss their plans and strategies to combat climate change, deforestation, and illegal mining, and to protect indigenous rights. The delegation held meetings with representatives of Brazilian government agencies and technology firms involved in developing future telecommunications networks to discuss the development and implementation of Open RAN technology in Brazil’s future 5G networks, as well as the importance of information security as a key factor in ensuring economic growth for Brazilian companies and building prosperity for all Brazilians.

Highlighting the deep friendship between Brazil and the United States, Mr. Sullivan stated, “Brazil matters. As the hemisphere’s two largest democracies, the United States and Brazil have a stake in each other’s success. Together we can advance ambitious climate goals, successfully combat the COVID-19 pandemic, and build back better in the region.” Officials from both countries reiterated their commitment to strengthening their partnership for the benefit of the Brazilian and American people and the hemisphere.